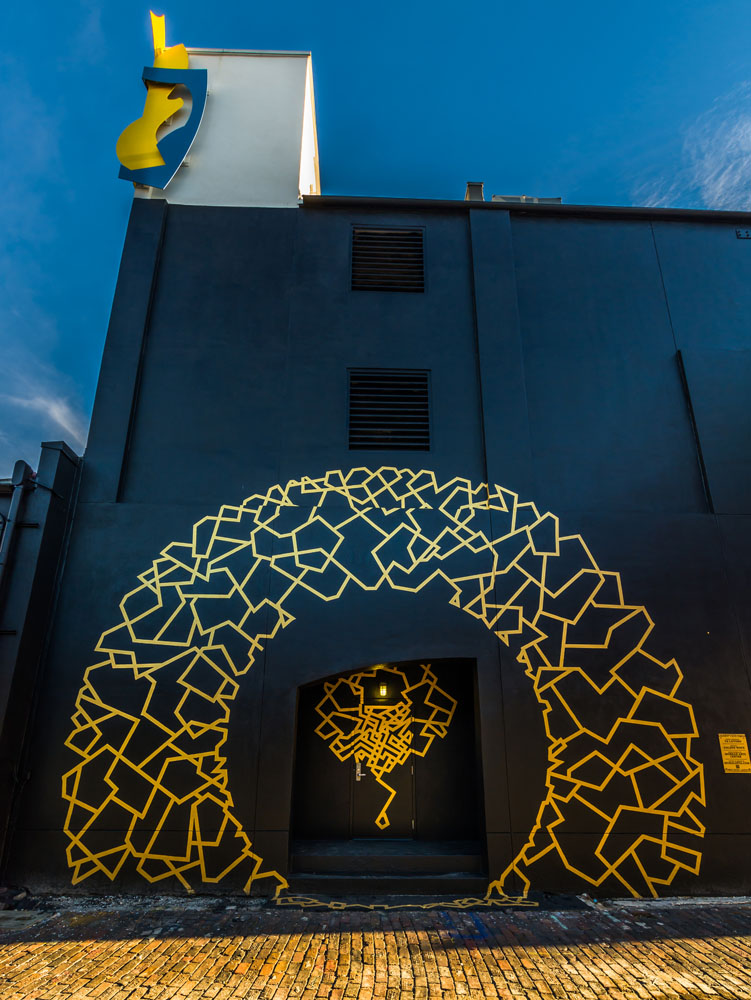 About Ya La Ford

Maintaining her studio work in both Tampa Bay and New York, Ya La’Ford is a professor, visual painter, installation artist and muralist, with a MFA from The Art Institute of Boston and a Juris Doctor law degree from the University of Florida for good measure. Her work can be seen across the country from the Boston Public Library to the Dr. Carter G. Woodson African American Museum.
Golden Wave, by St. Petersburg artist Ya La’Ford, is on the back wall of the Morean Arts Center. The Center is located at 719 Central Avenue. The mural’s in the alley behind the building, between Central Avenue and 1st Avenue North, and 7th and 8th Streets North.

The back wall of this two-story building is painted black. In the middle of the wall is a door, set back a few feet into the wall with two steps leading to the doorway. The doorway isn’t rectangular – the top of the doorway slopes to the right, in a jagged curve.

Surrounding the wall like a halo is a thick circle of golden patterns, 25 feet wide and 14 feet high. The band of golden lines is several feet wide, creating a circle so big that the base is cut off by the ground. Golden lines sprawl across the threshold in front of the steps.

The circle is made up of thin golden lines, weaving and interconnecting. Though the circle itself is round, it’s made up of straight lines and sharp edges.

On the door itself, hidden from anyone who isn’t standing directly in front of the doorway, is another pattern of gold on black. This image is centered on the door, covering the top of the door and spreading up onto the ceiling of the set-back doorway.

The pattern is made up of straight lines and edges, forming a circle twice as wide as the door. The circle is made up of large open shapes across the top, crowded into a tighter maze at the bottom. A single bent line extends down the door, ending in a small jagged circle at the base – like the string of a balloon.

To the right of the mural is a golden plaque decorated with angular patterns and listing the artist’s name – Ya La’Ford – the name of the mural – Golden Wave – made possible by the Morean Arts Center.

“I always work with geometric shapes,” La’ford explains, “which is referencing this notion that we’re all interconnected. I look at civilization—where we’ve come from to where we are today—and try to remind people that we need to get back to this space where we’re actually thinking about how we’re more alike.”

She notes that slaves during the days of the Underground Railroad would try to find routes to freedom, and hang up quilts as a sort of code. “A lot of my work started there, because I quilt, too. So these codes and patterns, it’s just like I’m trying to create overall what is a universal language.”