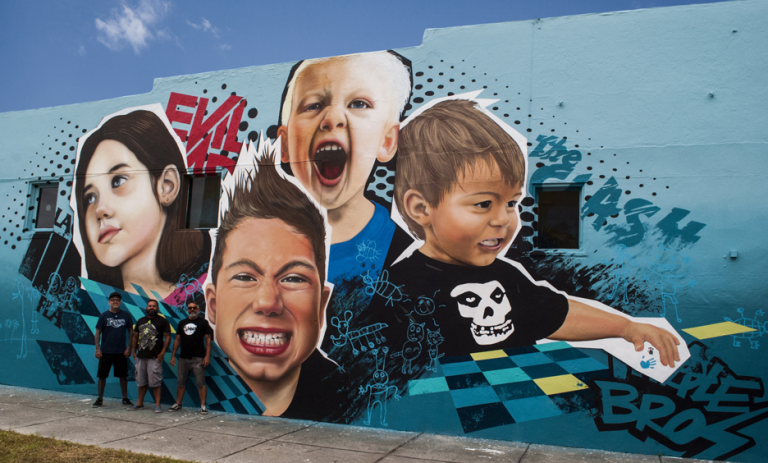 The Vitale Brothers are a St. Petersburg-based mural and hand-painted sign company, led by Johnny Vitale and Paul Vitale, with clients from the Tampa Bay Rays to Great Bay Distributors. Trailblazers in the local art scene, the Vitale Brothers have launched memorable art events for many years and collaborated in set design for movies filming in area such as Harmony Korine’s Spring Breakers.
The Cool Kids, by the Vitale Brothers, is on the west side of the building at 2063 Central Avenue, facing 21st Street North. It spans the entire wall, 55 feet wide and 15 feet high.

The mural shows the faces of four children – the children of the artists. They’re painted from the shoulders up and overlapping slightly, nestled in an off-kilter blue landscape. Their faces are vivid and expressive, and about ten feet high. They’re realistic, like a photo, and surrounded by jagged white borders as if they were cut out of a magazine.

On the left is a girl eight or nine years old, with dark shoulder-length hair and light blue eyes. She wears a dark pink shirt and she’s looking thoughtfully up and to the left. Her portrait gives a hint of what she’ll look like when she grows up. Her face and neck are highlighted, as if the sun is shining on her. Unlike the rowdy boys beside her, the girl’s lips are closed. She’s calm, and peaceful.

The lower center of the mural is dominated by a boy about her age in a black T-shirt, grimacing at us with teeth bared, making a face – as if a funny noise is escaping through his teeth. The boy has darker skin, full red lips, brown eyes and brown hair that swoops to the left and sticks up in a spiky ridge. His portrait vibrates with energy.

Over his right shoulder, is a younger boy with a white-blonde crewcut, blue eyes and a bright blue T-shirt, looking straight at us. His mouth is open in a joyous scream.

On the right is a boy who looks like he just learned to walk, holding his left arm out for balance. He’s the only child seen below his shoulders, his portrait painted to the middle of his chest – revealing a black T-shirt with a white, tired-looking skull.

The boy has light brown skin, unruly brown hair and brown eyes. His mouth in a happy almost-grin, looking curiously at something to the right of the mural. Just beneath his outstretched arm, in the white border surrounding his image, is a blue handprint.

Above him, on the right side of the mural, is the logo of a band, The Clash, in choppy blue paint. The capital C and the L are obscured by a small dark window set back in the wall.

It’s one of three identical windows, their frames painted blue to blend in with the mural. To the right of the girl is another window, between her and the boys. And a third is to her left, blending into a pattern of black dots on blue.

Over the girl’s right shoulder is the logo for the movie Evil Dead, in red. The word, Dead, is partly covered by the girl, and the spiked hair of the older boy in the center.

Black dots crowd around the children’s heads. In the center are bigger dots, diminishing in size as they approach the roof, like they’re fading away.

Across the bottom of the mural are light blue crayon-like images made by the children depicted in the painting.

On the left, two stick figures are smiling. Between the girl and the older boy, is a bird with long legs and three toes. Toward the center are childlike bees, a dog with five legs and a curving nose, two cats, a sun, and an alien with long antennae.

Below the children, on the left and right, are angled squares of blue and black, like tilted checkerboards. On the right, three yellow squares break up the blue and black pattern.

The tiles on the right cross the Vitale Brothers logo, painted like a cartoon shout in angled capital letters. The V-I-T and the left half of the A are covered by the hand of the boy on the right, reaching out to steady himself.

The Vitale Brothers are well-known St. Petersburg artists, very involved in the local arts community. This mural merges all their inspirations into one snapshot: music, movies, art and family.

Notes: As of 2020, this mural has been replaced with a new Vitale Bros mural.