Tes One and Palehorse 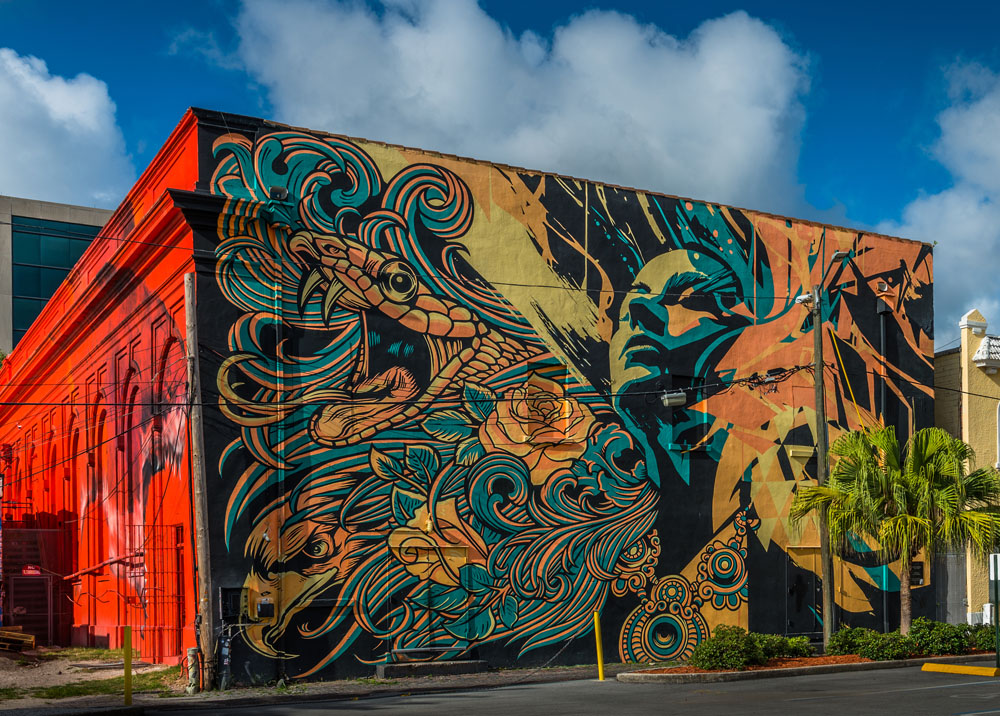 About Tes One and Palehorse

From crayons to krylon, Leon “Tes One” Bedore has been creating art on walls for the majority of his life. Tes became a serious street artist in 1992, painting murals and grati art throughout the Tampa Bay area. In 1999, he expanded on his natural artistic abilities, with that of the computer age, to develop compelling graphic designs for clients such as Nike, Beats By Dre, Redbull and many more. With more than a decade of experience as a professional illustrator and fine artist, Chris Parks, better known as Palehorse, creates highly detailed work that draws influence from his roots and an ongoing fascination for Southeast Asian and Latin culture, mythology and spiritual practices. His clients include Under Armour, Modelo, Sonos, Hasbro and WWE, and his gallery work has been exhibited in Miami during Art Basel, Los Angeles, New York, Berlin, Jakarta and more. He is also a founding member of the SHINE St. Petersburg Mural Festival, serving as co-curator and organizer from 2015-2017.
This mural is titled State Lines, a collaboration between St. Petersburg muralists Tes One and Palehorse. It covers the back wall of the State Theatre building at 687 Central Avenue, in the alley that faces 1st Avenue North.

The mural is a cloud of oranges, yellows and blues against a black background, 58 feet wide and 33 feet high. Covering the center is a woman’s face, turned upwards, to the left. Her eyes are closed. Her face is framed by swirling colors and her long black hair is blown up and to the left as if by wind, or water.

To the right are jagged abstract shapes of oranges and gold and black, overlaid with shots of blue. The shapes fall from the top of the wall toward the bottom, before the lower right corner turns black.

Swirling blue tendrils outlined in orange shoot past the woman’s neck, curling to the left. An enormous orange snake’s head rears up from the tangle. The snake’s mouth opens to the left, with two sharp, curving fangs and a long forked tongue.

Below the snake is the head of a large orange eagle. His curving beak is closed, his solemn eye fierce, and determined. Blue leaves, and two huge orange roses, nestle around him in a sea of blue swirls.

An ornate medallion hangs heavy at the woman’s neck – an enormous blue and orange circle flanked by two smaller jeweled suns. The ornate design resembles curving metalwork, and dominates the bottom center of the mural, so large that the pendant is cut off by the ground.

The face of the woman, rising from the center of the wall, is the focus of the mural. She’s painted simply, almost like a shadowed sketch. Her closed eyes and relaxed lips are peaceful, as if she’s soaking in the sun or listening to music.

The right side of her face is shaded with blues and blacks. The left side is pale gold, turned to welcome thick yellow and orange swaths of color angling towards her cheek, like sunlight shining. The eagle, snake and roses on the left flow out of her.

A black plaque on the bottom right says the mural was created in 2012 by Palehorse and Tes One, with execution assistance by the Vitale Brothers team. The mural is a landmark for bands looking for the stage entrance to the State Theatre. The loading door is on the bottom left, almost invisible, obscured by blue and orange swirls to the right of the eagle’s head.

Just around the left side of this building is a giant red shark by the artist known as Shark Toof. To your left is a brick-lined alley lined with murals – and across the parking lot, the colorful mural, Eye of the Storm.

Address: In alley behind 687 Central Ave

Building: As of Fall 2019, this mural is no longer visible