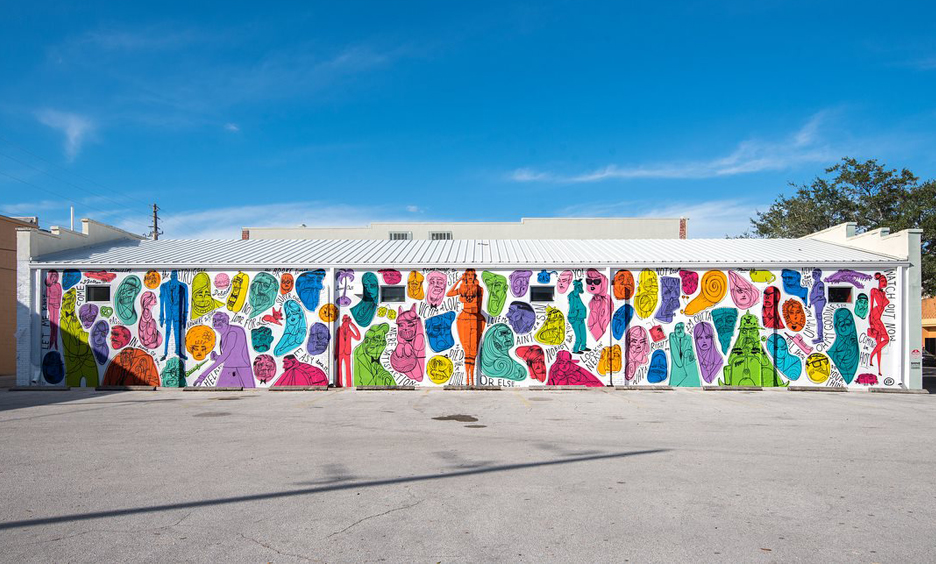 Based out of: New York, NY

New York-born artist Stephen Palladino creates work combining raw, expressive mark making with tight and clean lines. Building upon his childhood obsession with cartoons and graffiti, Palladino creates characters that are slick and gritty, dark and lowbrow, mashed up with hidden layers of popular imagery and dialogue. Commissioned by Lady Gaga, Absolut Vodka, Reebok, and others, Palladino is currently based in Los Angeles and presented his first solo gallery show there in 2015.
The bright fluorescent colors of Stephen Palladino’s abstract cartoon at 276 Dr Martin Luther King Jr Boulevard North are a shock of aqua, orange, lime green, purple, blue and rosy red.

From a distance, this long south-facing wall appears to be a cheery puzzle of abstract shapes nestled close together, 17 feet high and stretching 95 feet wide. Triangles and oblong shapes, circles and not-quite-circles. Rounded rectangles, and many shapes like awkward objects in a bag.

But even at a distance there are recognizable human forms, also of solid colors. At the center, a curvy orange cartoon woman as tall as the wall. Toward the left, a tall blue man in a suit. On the right, a red slinky woman in profile, her hair in a bun.

If you move closer, these odd colored shapes resolve into detailed line drawings in black paint – done in Palladino’s distinctive style of squashed heads and distorted features, not unlike German Expressionism done with a sharply modern hand.

All the figures are precisely drawn – then painted in a single solid color as a shape, with rounded edges.

Other human figures include a rose-colored woman on the far left, with long curled-under hair, wearing a fanny pack. Beside her, a distorted, lime green gent in a bow tie who looks like an emcee, giving an act the signal to get off the stage.

Further along, a hulking purple man, in the middle of a fistfight. A pink half-woman, half-cat with teeth bared and a ball of yarn. A glaring, lime-green guy on a motorcycle, heading toward us, with a World War I German helmet with a spike.

Tucked among the colored shapes are words, in simple black paint. Some in capitals, some in cursive, some in a combination of both. Phrases like

The broke times.
No time for dreamin’.
Helpless
Easy does it
Mere satisfaction
I died just a little
Victim of Love
Yo!
Love me
Or else
Ain’t it a Sin
Nobody but you
Never too sure
Come together
Cruisin’
The struggle
Delicious
Umm, hello

As a fan of cartoons and graffiti, Palladino creates characters that are slick and gritty, dark and lowbrow – all mashed-up with layers of popular imagery and dialogue. His work has been commissioned by Lady Gaga, the NBA and many other companies.

The mural faces south, in a busy commercial neighborhood, so cars miss it on this one-way street. Its colors complement the swollen rainbow-headed creature on the mural just to the left, by Alex Pardee.