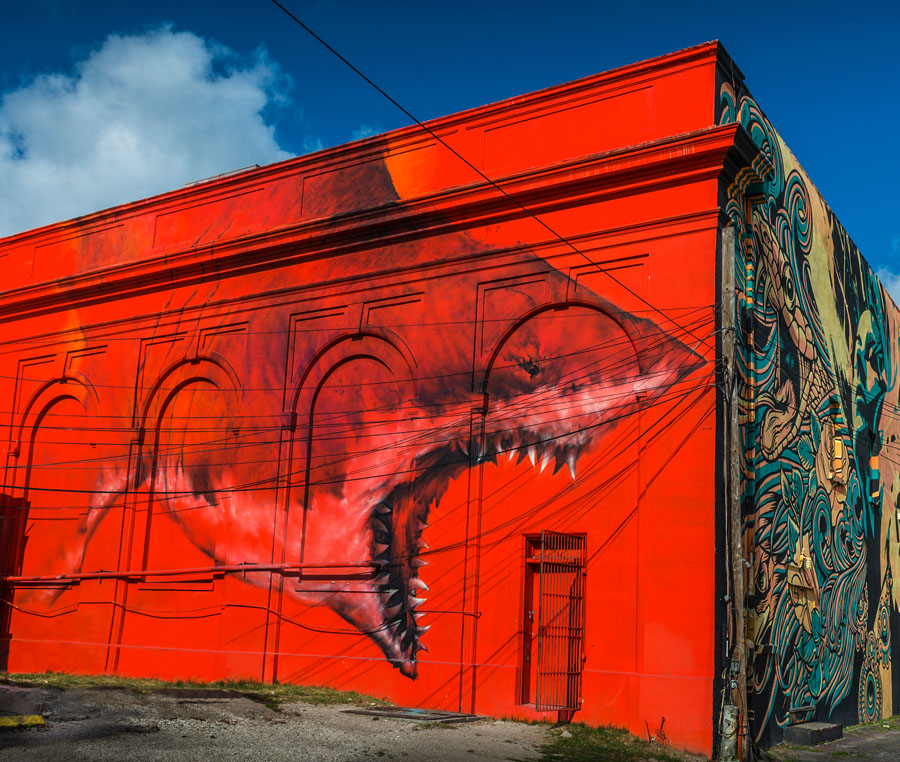 Sharf Toof is a Los Angeles-based graffiti artist best known for his iconic shark imagery used to convey “strength, optimism and possibility to the viewer.” With gallery exhibits and large-scale murals from coast to coast, Shark Toof’s work is internationally recognized and can be seen in television commercials for Samsung and Apple.
This mural by the artist known as “Shark Toof” – that’s Toof spelled T-O-O-F – is on the east wall of the State Theater building, at 687 Central Avenue.

The background of the mural is a hot tomato red, a shock of color across a high, horizontal wall that faces east, running from Central Avenue to the alley behind the theatre. Diving across the wall is an enormous great white shark, 55 feet wide and 33 feet high. The shark is so gigantic that its head, chest and one fin are all that fit.

The shark is in motion, diving from left to right and covering two-thirds of the rich red wall. The mouth of the shark is open wide, poised to chomp down on whatever comes out of the door in the lower right corner, set back in the wall and covered by a metal grate. The door and the metal bars are painted red.

The shark’s open jaw is centered above and to the left of the door. The mouth and razor teeth are huge, gaping large enough to fit the door with room to spare.

The shark’s upper jaw reaches over the door, stretching toward the top right corner. The lower jaw points down, almost to the ground. Jagged white teeth line the shark’s mouth, pointing in many different directions. The nose extends to the right edge of the wall. The dark eye is squinting and angry.

The shark’s right fin angles down the center of the wall, pointing left. The body curves up past the roof. The underbelly and the skin around the shark’s mouth are a lighter shade of red – as if what’s white in nature is tinted by the blood red of the wall. The lining of the shark’s mouth glows red.
The rest of the shark’s body is shades of gray. The dark lines of four gills are painted above the fin, stretching toward the top of the wall.

The angle of the shark’s dive suggests fast, furious motion. The wide-open mouth and squinting eye give a feeling of aggression, hunger and anger.

The artist hails from Los Angeles and is known around the world for his iconic shark illustrations. Although the shark’s reputation is fearsome, Shark Toof uses the image of a shark to give strength, optimism and possibility to the viewer. He sees the shark as a voice of rebellion, and a conduit for the unheard.

At the artist’s request, the wall was painted red before he got to St. Pete. Even so, the mural took four days and almost one hundred cans of aerosol paint – and it was a challenge because of wires and the architectural details of the wall.

When the painting was done, the artist stepped into the doorway on the bottom right, closed the iron grate and said, “See? Now I’m in a shark cage!”

If you’re facing this mural, around the corner on your right is another mural, called State Lines. Behind you, across a parking lot, is Ricky Watts’ colorful Eye of the Storm, and a brick-lined alley that is wall to wall with murals.