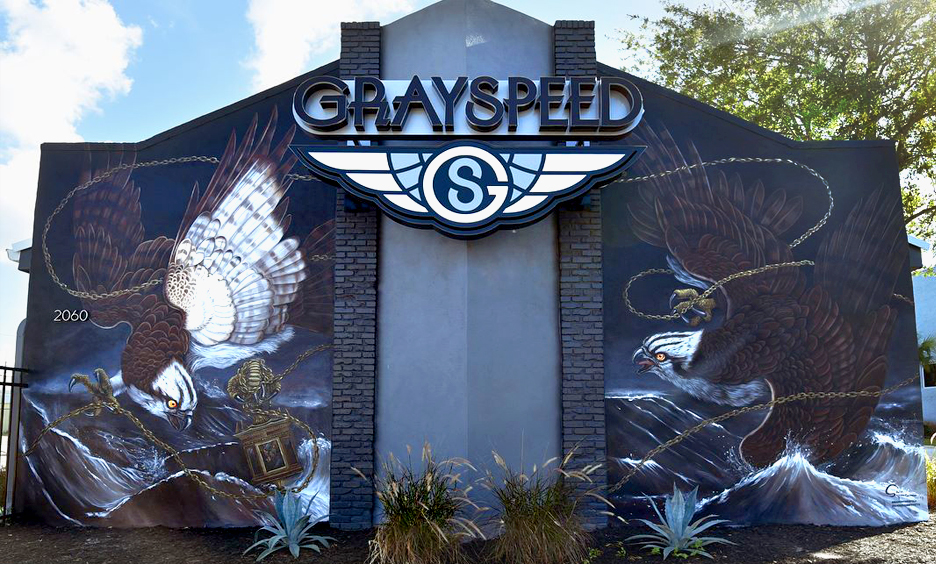 Based out of: Australia

Sam Yong is an artist and illustrator based in Melbourne, Australia, working across a variety of traditional mediums. A love of nature and solo adventure manifests through his art, where intricate illustrations reflect on complex relationships between living things. Yong has exhibited in Paris, the United States, New Zealand, Melbourne, and is placed in private commissions across the globe.
This mural by Sam Yong is on the southeast corner of 1st Avenue South and 21st Street South, facing 1st Avenue.

The roofline above this narrow wall is flat, then rises to a peak, like an A-frame stretched wide, with about three feet of flat roof on either end. A plain gray section takes up the middle, framed by two thin brick columns and topped by the Grayspeed Cycles sign, with a large logo like a blue and white winged aviator’s medal.

The wings of the logo stretch out to touch both sides of the mural. The mural is in two parts, each 12 feet wide and 16 feet high, one on each side of that grey center band. The images connect to each other, as if the center strip is blocking the middle of the picture.

The background of the mural is the black of nighttime. Across the bottom third is a stormy sea, waves and whitecaps. In the distance are storm clouds, and a hint of light at the horizon.

On each side of the mural is a giant osprey in brown and white, taking up most of the wall. The osprey is a raptor, birds who fish from St Pete’s coastal neighborhoods and often build large bushy nests on billboards and utility poles.

On the left, the osprey is in flight. We see the underside of its left wing, white with brown stripes. Both wings are pointed up toward the roofline. The bird’s tail points to the right, the head is curved down and to the right, below its body. The downy feathers on its belly are ruffled, as if from strong winds.

The osprey is grabbing a hexagonal brass lamp. The left claw holds the lamp by a ring on the top. The right claw is open and holds a brass chain. The chain sweeps across the bottom of the mural, around the lamp to the other claw. The chain flies in an S curve across the bird’s body and stretches up and over to the right-hand section of the mural.

On the right, a second osprey looks toward the bird on the left. The brass chain the osprey on the left clutches comes into the top of the image on the right, wraps around the other bird’s right wing and through its claw – around its body, then across the bottom of the mural to the other side again, in a loop implied by the blank grey section in the middle.

The osprey’s right wing points up, feathers spread wide. The left wing is curved in and down, its shoulder brushing the waves. The bird’s beak is open as if calling to the other osprey.

Both birds are precisely detailed – thin brown stripes and spots on the down of their heads, gnarled yellow legs, the shiny black of claws and beaks.

On the bottom right is the artist’s name – Sam Yong, and “seventeen” for the year.

Sam Yong is an artist and illustrator based in Melbourne, Australia, working in a variety of mediums. His art reveals a love of nature and solo adventure, and his intricate illustrations reflect complex relationships between living things.

Yong has exhibited around the world and is best known as a fine arts painter of striking natural images. He’s been part of mural festivals in Hawaii, and in 2017 was commissioned to create a mural for the movie, Spider-Man: Homecoming.