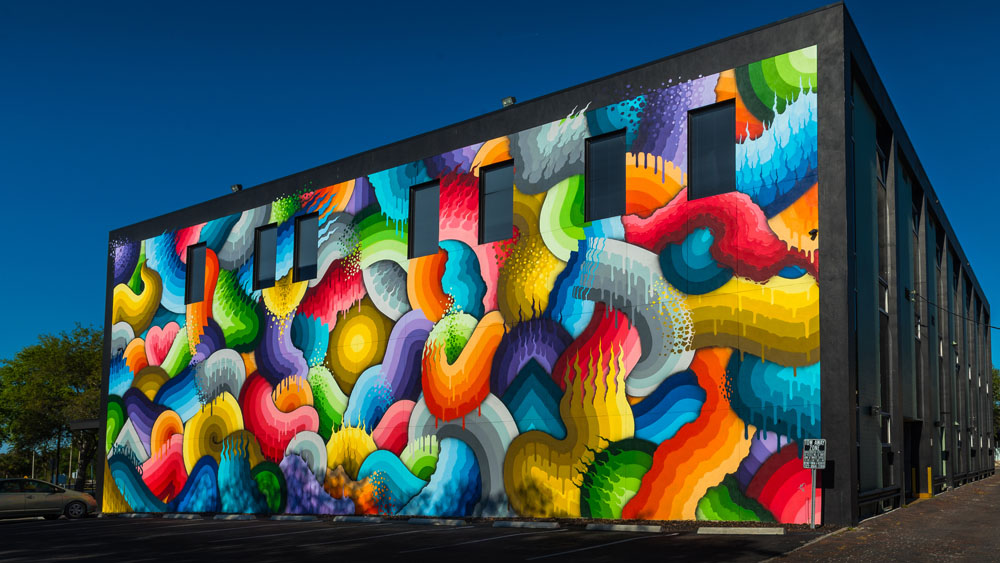 Based out of: Northern California

A leader in the Northern California graffiti scene in the 90s, Ricky Watts is a designer, illustrator and street artist, who’s known for his interlocking layers of vibrant color. Watts’ large-scale murals can be seen across the country from Oakland to Atlanta. He is also a member of the ZeroFriends collective along with Alex Pardee and Dave Correia.
This colorful mural by Ricky Watts is on the west side of a large three-story building at 600 1st Avenue North. It’s called “Eye of the Storm.”

The thunderstorm is impressionistic – blues, purples, greens, reds and golds. Colors roll across this massive horizontal wall, 96 feet wide and 30 feet high. These curls of color sometimes seem like abstract waves, dripping at the edges. Other times, they flicker at the edges, like flames.

Each wave of color is textured – so a purple wave has several shades of purple, shifting from light to dark. A red wave i s many different shades of red. This makes the wavelike forms appear to vibrate with movement.

The mural is framed by the black trim around the building’s edge. Near the center is a glowing circle in shades of gold, almost lost in the tumultuous waves. This is the “eye of the storm,” that commemorates a hurricane scare right before the 2016 SHINE Festival.

On the far right, several rich blue circles edge into the colored waves. The circles were inspired by the M.C. Escher exhibit that was at the Dali Museum at the time. On the left, a Valentine heart peeks out of the waves, in shades of pink and red.

At the top of the mural, seven black glass windows start at the right edge and are placed almost all the way across, on the building’s third floor. The black of the windows matches the black trim of the building.

This mural is so full of motion it seems to be throbbing, the colors trying to reach out of the wall and splash onto the ground.

A leader of the Northern California graffiti scene in the ‘90s, Ricky Watts is a designer, illustrator and street artist. Alex Pardee, another mural artist on our tour, helped out for several days. Eye of the Storm took 10 very long days to create, and over 500 cans of aerosol paint.

The mural is gorgeous, but most people never see it – because it’s on a one-way street where cars are driving away from the wall instead of approaching it.

But it’s a showpiece in a block that’s bursting with murals. On your right is an alley lined by smaller murals. Even the dumpsters behind the businesses are brightly painted. Close to this mural is a loving closeup of Frida Kahlo, and a giant lizard, for Jim Morrison the Lizard King, who lived in the area before he started The Doors.

Heading east along the alley is a tribute to the artist Woo. And heading west, a bold red Shark, just across the parking lot.

Title: Eye of the Storm