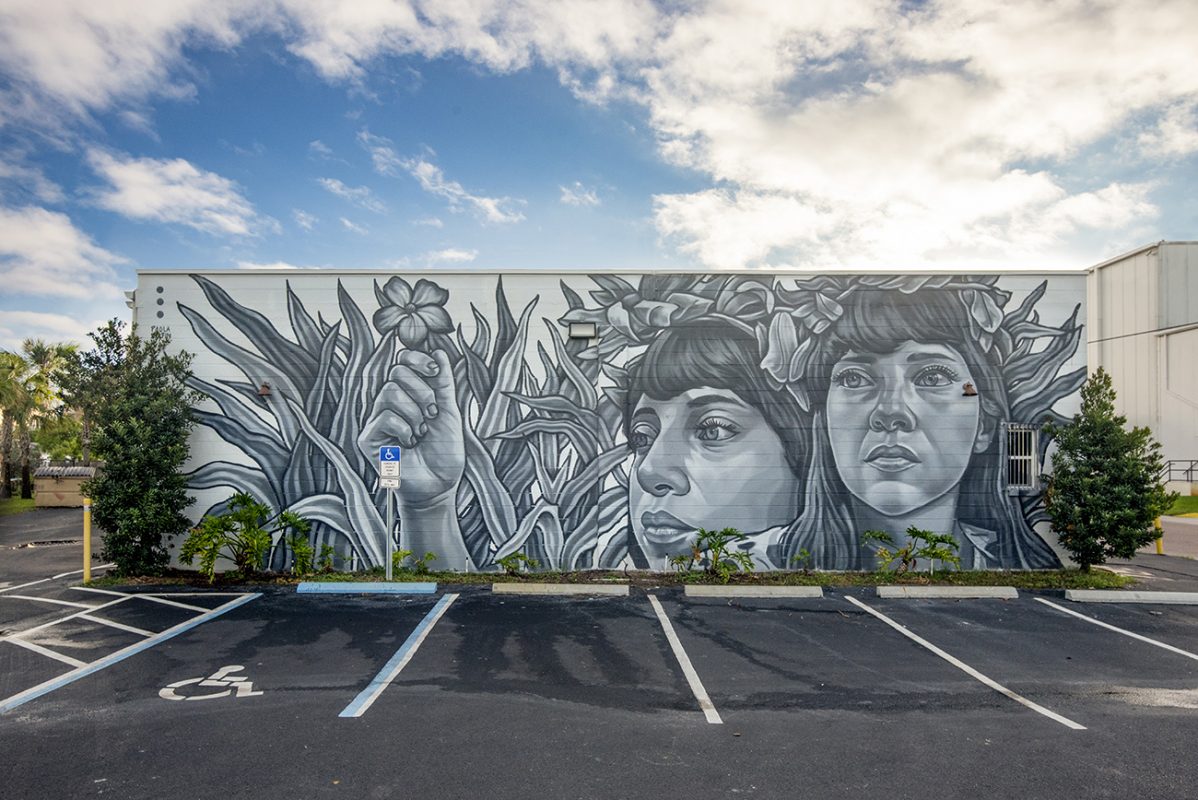 Based out of: Mexico

Mexico City based artist Paola Delfin is best known for her monochromatic exploration of the female form. Through meticulous technique, Delfin portrays the concepts of beauty, strength, and femininity. Aiming to make her work universally available to all audiences, Delfin has painted murals in more than a dozen countries around the world.
La Emperatriz (The Empress)

The quiet, subtle mural that Mexican artist Paola Delfin created at 1975 3rd Avenue South, is calmly mesmerizing. Painted in the colors of a pen and ink drawing, two versions of the same woman’s face rise out of tropical leaves. Finely painted leaves in shades of black and grey surround both versions of her, clustering over both heads like a crown.

The mural faces west, 50 feet wide and 12 feet high. It’s only a few feet from the Pinellas Trail. The Trail cuts close to the left edge of the mural at an angle, bright with the Sunshine City-themed work of Chad Mize, James Oleson and students from Pinellas County Center for the Arts.

The young woman in the mural has bangs, and shoulder-length dark hair, highlighted by the sun. Her face is calm, and thoughtful. In the portrait of her on the far right of the mural, she faces you. The top of her head almost reaches the roof.

In this version, she’s looking to the left, as if she’s focused on something just across the street. Her large grey eyes are feathered with long lashes. In the black and white tones of the mural, her skin moves through shades of grey, as if the sun is reaching her through branches that are casting shadows.

A narrow vertical window with a white grille touches the ear on our right.

Just to the left of this portrait, another version of the same woman looks over her shoulder. Her face is larger, closer, and angled to the left – as if she’s looking somewhere else entirely. Tucked behind the left-hand shoulder of the other portrait, the bottom of her chin goes past the bottom of the mural. But because her face is larger, the top of her head is just a bit below the other version of herself.

Both portraits nestle on the left side of the mural, while the right side is lush with the tall, striated leaves of tropical plants. In the middle of the leaves, her enormous hand rises up, holding a flower that touches the edge of the roof, as if she’s offering it as a gift. The hand holding the flower belongs to the version of her on the left, the one looking across the street.

Actual tropical plants grow at the base of the building, and tall evergreen shrubs on each end. These living plants blend with the painted ones, and make the mural seem to grow out of the landscape.

The title of this mural is La Emperatriz. It’s an image based on a tarot card. In tarot readings, “The Empress” reflects mothers. She can represent creation, romance, art or new beginnings.

The woman in the mural is Paola’s friend, from Orlando, who helped her paint the mural. It was completed in four days with bucket paint and brushes.

Paola Delfin says, “I believe that art needs to be seen everywhere possible, to bring a white wall to life, and make a story out of it.

“My passion is to create, be available to tell a story with my hands and make it visible to everyone though images that involve you in that story. That feeling is what makes me love being an artist.”

This is one of seven SHINE murals currently on 20th Street South. Just across the street is the monumental face of a retreating Spanish soldier in the waves, painted by England’s Nomad Clan – almost exactly where the woman in this mural is looking.