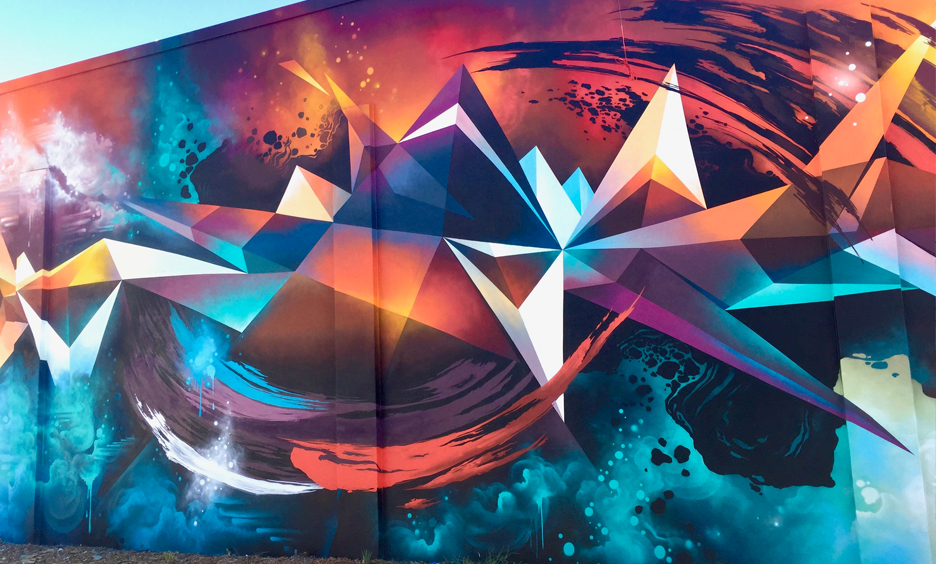 Influenced by early years as a graffiti artist in Copenhagen, Mikael B founded his own design agency before moving to Los Angeles to work as an urban contemporary artist. His signature identity combines the graphic footprint of wildstyle graffiti with bold colors and geometric shapes, building a dynamic universe reminiscent of musical visualization. His monograph includes energetic works on canvases and walls, gallery exhibitions, and commissions by clients such as Google, Nike, and American Express.
This spectacular explosion of sunset colors is by Mikael B [“Michael”], on a long low wall at 1123 1st Avenue North.

The wall faces west, 18 feet high and 60 feet wide, so it’s invisible to drivers on this one way street, unless they pull into the parking lot. A shock of spacey purples, oranges and blues, with bits of white and gold, the wall is like an abstract view into a nebula, or another planet.

The central band is dominated by spiky, sharp, triangular bursts of purple, white and orange – a jagged outbreak of pointed shapes that erupt from the wall, almost three-dimensional. Many of these points are tipped with gold.
This angular flare-up looms out of a turbulent, rich blue sea, with bright glowing waves textured by dark currents and bubbles. Toward the left, one giant wave shoots all the way to the top of the mural, blending with a flaming orange sky that seems to glow with fire.

In the upper left and lower right corners, this maelstrom of color is calmed by gold-white surf and streaks of white that drip over spiky orange barbs, a view of distant mountains through a mist. And on the lower right, the artist’s signature, in flaming orange.

Mikael B spent his early years as a graffiti artist in Copenhagen, and founded his own design agency before moving to Los Angeles.

His work combines the graphic footprint of wildstyle graffiti with bold colors and geometric shapes, building a dynamic universe that evokes images of music.

He creates energetic works on canvases and walls, and commissions for clients such as Google, Nike and American Express.

Mikael B says, “I want to create a personal space, an infinite universe, a haven where thoughts can wander and the gaze can be bewildered, concerns and negative thoughts can disappear. . . so we can just be.”

This mural faces the powerful Aztec god of rain, by Daniel Barojas. It’s a burst of color in this busy commercial neighborhood, visible from the new St Pete Police Station, one block west.