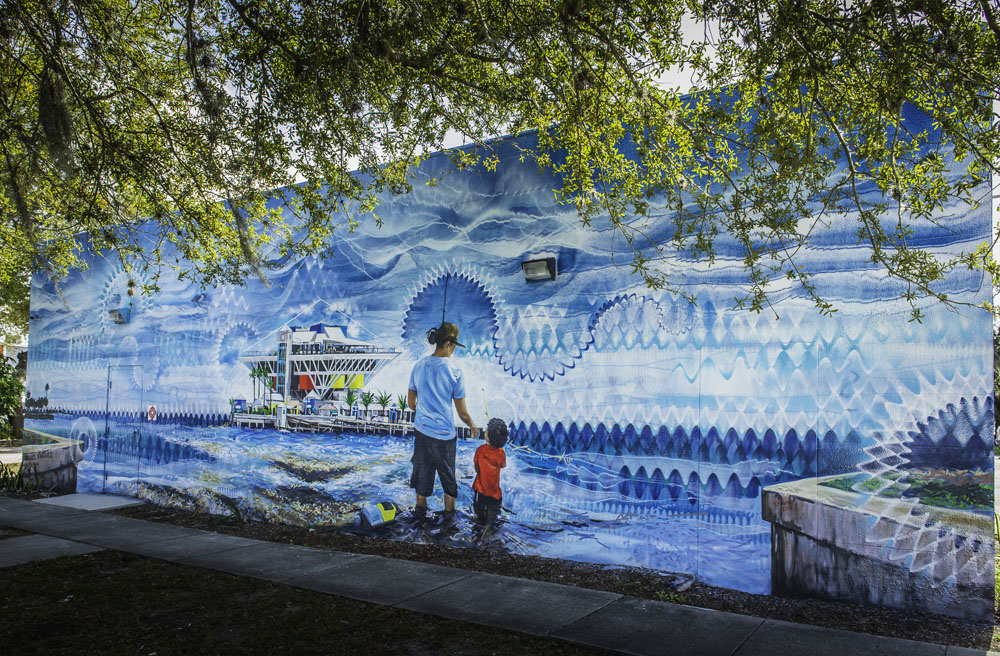 A St. Petersburg native, working out of Miami, Vasquez is a figurative artist best know for his focus on urban, street culture and identity. His work has been shown in galleries around the world including a current exhibit at the Smithsonian National Portrait Gallery in Washington DC. This is Vasquez’ first large-scale mural.
The mural by Michael Vasquez on the front wall of 2260 1st Avenue South, is one of three murals on this single-story building. It’s titled, Let’s Go Back.

The impressionistic view of the former St. Pete Pier is like an old-fashioned Florida postcard, with a delicate blue sky surrounding the angular upside-down pyramid that was demolished in 2015.

That pier design was always controversial, but unique. The classic Mediterranean-style pier famous in the 1920s made way for the inverted pyramid in 1973, an effort to help St. Petersburg be seen as hip and modern.

The mural takes up the entire wall, 60 feet long and 14 feet high. The Pier is painted slightly left of center, at the end of a long dock connecting to St. Petersburg’s downtown. It’s white, with huge dark triangular windows and bright red, blue and yellow blocks of color. The roof is wide and square, and the building narrows at the bottom, an upside-down pyramid shape. Low, white buildings and blue buildings with white roofs cluster around the base, with palm trees bristling between them.

To the right of the Pier, at the center of the mural, are a father and son standing in the water, close to us, with fishing poles.

Their backs are toward us. The father’s looking down and to the right, toward his son, and reaching out his right hand to assist. The boy has a much smaller, yellow fishing pole. He’s looking toward the Pier.

The father wears a baseball cap, that holds his dark hair in a rounded ponytail. He wears a light blue shirt and black knee-length shorts. The boy has unruly dark hair, black shorts and a bright red shirt. They’re standing in the shallow water, with a blue and yellow fishing float washed up beside them. The view is framed by the downtown St. Petersburg shoreline in the lower right and left corners, raised above the water with a secure concrete edge and freshly-mowed grass.

The colors are the colors of a classic painted postcard. The bright red of the boy’s shirt matches the red block on the Pier, and the yellow panels on the Pier are the same shade as the yellow on the fishing float and the boy’s fishing pole.

But the blue sky and blue water are more layered and complex than any postcard. The sky is many shades of light and darker blue, riddled with peaks and valleys halfway between clouds and imaginary mountains. Large blue circles fringed with geometric lacy patterns blend into the sky. And on the right as the dock leads to downtown, the sky becomes more abstract and geometric, with blue arcs like sound waves undulating across the dock and a lacy white circle poised above the green grass.

The water that the father and his son are standing in is roiling with small waves and whitecaps.

On the left side of the wall, a door with a circular overhang is barely noticeable – both the door and metal overhang are painted to become part of the mural.

Michael Vasquez spent most of his career documenting and painting street kids, including in his hometown of St. Petersburg. Many of these children joined gangs, to be part of a substitute family. Michael’s paintings have earned national attention, including in the Smithsonian’s National Portrait Gallery in Washington DC.

This is Michael Vasquez’s first mural. It reimagines his childhood in St. Pete. Michael grew up with a single mom, and chose to use this wall to imagine what his childhood could have been, fishing with his father.

The abstract lacy patterns in the background were created by his friend, the artist Hoxxoh, who used aerosol cans and a modified house painting sprayer to create the clouds. The lacy diamond patterns are recognizable from the larger mural Hoxxoh created just a couple of blocks away, at 2130 Central Avenue.