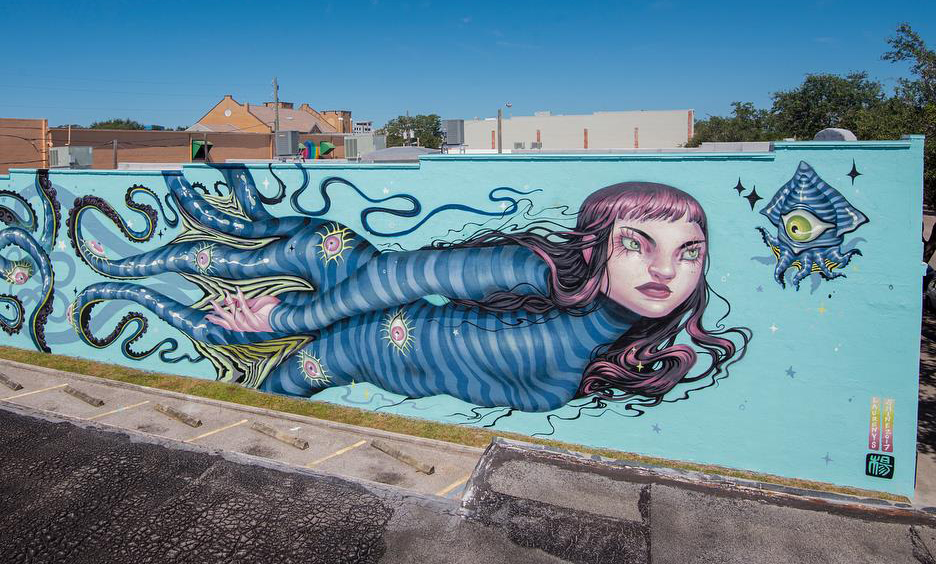 Lauren YS is a San Francisco-based artist whose work is influenced by dreams, mythology, and her Asian-American heritage. Her large-scale public murals bring a sense of wonder to communities, as she populates a vibrant wonderland with misfit heroines and fantastic narratives. Lauren’s art appears at festivals such as Art Basel Miami, Pow!Wow! Hawaii, and PangeaSeed SeaWalls, as well as in galleries in Vienna, London, and Sydney.
This mural by the artist Lauren Y-S covers the south wall of 240 Dr. Martin Luther King Jr Street North. The traffic is one-way southbound here, so you need to pull into the narrow parking lot on the west side of the street to view the mural.

The background of the mural is sea foam blue. Across the long, one-story wall, 23 feet high and 104 feet wide, is a creature swimming, with the head, torso and arms of a woman, and octopus-like tentacles where her legs would be. She’s swimming from left to right, towards the front of the building.

Her hair is dark reddish brown, with short, straight bangs across her wide forehead, and long flowing curls down each shoulder. Her eyes are wide open. Sharply drawn eyebrows accentuate her kohl-rimmed eyes and long, sparse lashes. Her lips are full, with thick dark lipstick. Her expression is distant, and serious.

Five tentacles stretch out from the woman’s hips. Two go straight back and curl as they narrow into strands. Two reach up beyond the top of the mural, and one reaches down past the ground.

Her left arm stretches back along her side, her hand palm-up just past her hips, with dark blue fingernails. Her face and hand are light, but the rest of her, including the tentacles, is light blue with dark blue stripes, as if part of her skin is a blue-striped wetsuit.

At various points on these stripes, there are wide-open reddish eyes with yellow lashes. These eyelashes are straight out and long, so that the eyes look almost like a shell. One eye is on her stomach, one on each hip, and two more on the tentacles.

On the far left of the mural, two tentacles attached to a creature we can’t see reach in from above and below, intertwine, and stretch out to the left.

In the top-right corner of the mural is a sea creature, shaped like a pyramid with one wide eye and tiny octopus legs, in the same blue-stripes as the woman. The woman seems to be swimming toward the creature as it watches her.

In the bottom right of the mural are two vertical columns with yellow letters against backgrounds fading from yellow to purple, that say “Lauren Y-S” and “Shine 2017”. Below is a black square with blue pictograms.

Lauren Y-S is based in San Francisco. Her work is influenced by dreams, mythology and her Asian-American heritage.

Her large-scale public murals bring a sense of wonder to communities, as she populates a vibrant wonderland with misfit heroines and fantastic narratives. Lauren’s art appears at festivals such as Art Basel Miami and Pow!Wow! Hawaii, as well as in galleries in Vienna, London, and Sydney.