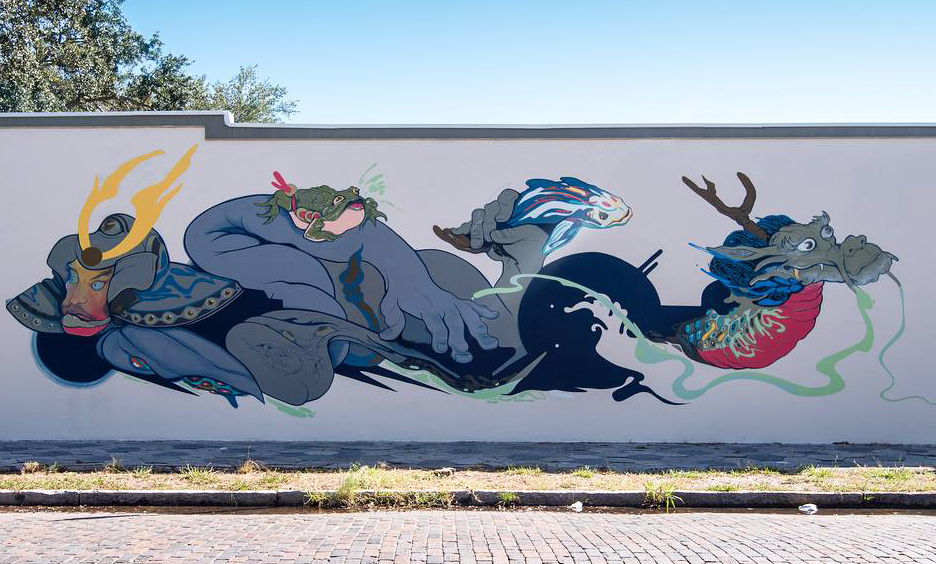 An artist and image-maker based in Miami, Jose Mertz pushes an experimental style inspired by ancient civilizations, science fiction, eastern philosophy, and the supernatural. Embracing multimedia platforms, his work ranges from traditional painting and murals, to product design on t-shirts and stickers.
This mural by the artist Jose Mertz is at 1756 Central Avenue, on the west wall facing 18th Street South.

The background of the wall is creamy white, 50 feet wide and 17 feet high. The image is a mix of modern, fantastic illustration styles with elements of traditional Japanese paintings.

Stretched across the wall are either two creatures tightly wound together, or one creature with two heads. On the left side, the head of a samurai warrior, almost in profile, looking to the left across Central Avenue. The samurai’s face is in an armored helmet, in the style of traditional Japanese paintings – with two long gold horns branching off the top of the helmet.

His eyes are wide open, white with black pupils and no iris, dark thin eyebrows angled up. He has a thin mustache, and his chin is covered by the dark red strap of his helmet.

The helmet is wide and grey, with yellow antler horns reaching up from a dark, circular emblem at his forehead. At the top of the helmet is a single glassy eye, with a green iris. The helmet and the eye are in a more modern style of painting than the Samurai’s face. The helmet is trimmed in black with green gemstones, and a blue wavy pattern across the brim.

Below the samurai’s head is a circular black shape, outlined in grey. Where his shoulder would be is a grey fin, and hints of a light blue underbelly with red spots.

To the right of the fin, under the edge of the helmet, is a grey sac, bulbous and curving, with a face in the center and large, staring eyes looking up.

The center of the creature is grey, an incongruous torso. The torso is reclining on its right side, as if it’s the body of the samurai. A huge left arm folds over and lies across the middle, fingers open. On top of that arm is a green frog, out of a Japanese painting, wearing a jeweled fuschia sash whose ends poke up above the figure. Green scaly skin, a pale pink underbelly, yellow, bulging eyes, and a dark pink tongue, with a liquidy green spray shooting off to the right.

On the right side of the torso, where the samurai’s hips should be, the creature’s huge right forearm rests on its belly. Just to the right, its other hand reaches straight up. In that hand is a Japanese koi fish, head facing right, in fantastic stripes of blues, yellows and reds.

A single antler points out of the dragon’s head, to the left. His eyes are open, mouth closed, a couple of fangs dangling down past green lips. Long green whiskers, one on each side, flow down past the snout and trail off in opposite directions.

In the top right corner, very small, is the artist’s name and “Shine 17,” in thin black letters.

The creature, be it Samurai or dragon, is a striking presence, an undulating image full of movement.

Based in Miami, Jose Mertz pushes an experimental style inspired by ancient civilizations, science fiction, eastern philosophy and the supernatural. His work ranges from traditional painting and murals, to product design.