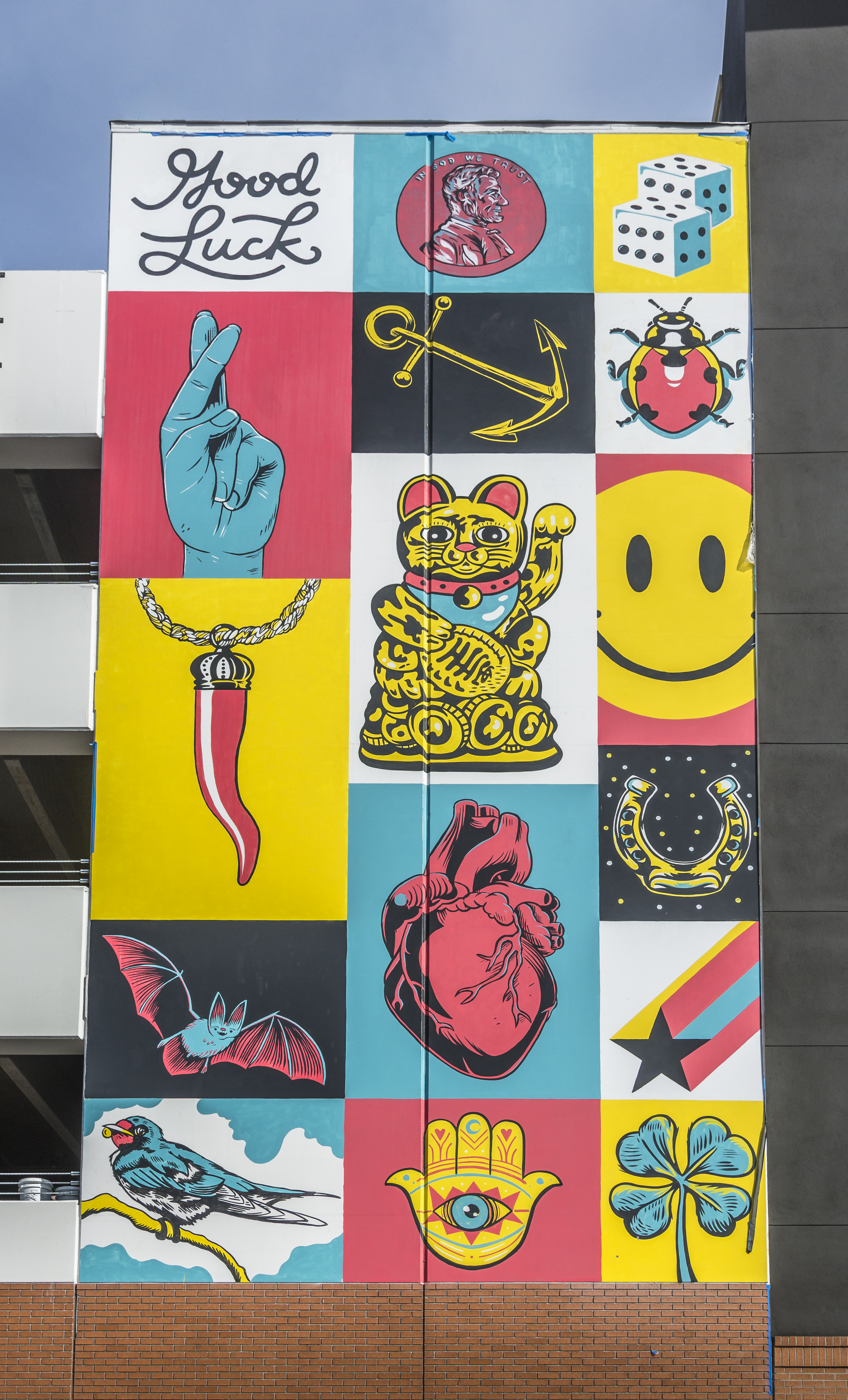 About Jimmy Breen and Anthony Freese

Co-owners of Wax & Hive, Jimmy Breen and Anthony Freese collectively bring over two decades of professional creative experience. Specializing in illustration and graphic design, Breen and Freese have worked with many notable clients including Cardi B, Blake Shelton, Blooming Brands, and Hunger & Thirst Group.
Lucky You

This mural, titled Lucky You, is at 1701 Central Avenue. It was painted by St. Pete locals Jimmy Breen and Anthony Freese.

The mural is 18 feet wide and 42 feet high. It’s a tall vertical mural that starts above the brick first floor of this apartment building and stretches to the top of the three-story parking garage. The building and the mural face the freeway. Drivers on I-275 North can see it – and the roar of the highway is constant, a half-block from the mural.

The mural was designed around the concept of luck – as the artists say, we’re all lucky to live in Saint Pete! It features symbols of good luck from around the world, in a grid with three columns.

In the upper left corner, the words “Good Luck” are painted in neat black cursive against a white background. To the right, in the center column, a pink Lincoln penny is painted against blue. And in the upper right corner, a pair of white dice against a yellow background are rolled to a pair of fives.

Going down the left side, just below the words “good luck,” is a large blue hand gesturing “fingers crossed,” against a rich red background. This left hand is facing us, index finger crossed over the middle and the thumb holding the other two fingers down.

Below the hand is the loop of a necklace with a bright red cornicello – or Italian Horn – dangling from a braided chain, against a gold background. The cornicello is an Italian chili pepper thought to ward off evil. This long thin pepper twists to the right and is painted as if light is bouncing off it from the left. The pepper is mounted to wear around your neck.

Below the pepper is a light blue bat with long pointy ears and pinkish wings, seen as if it’s flying over us, against a black background. Bats are a Chinese good luck symbol. Below the bat, a lark, blue with white-tipped wings and a white belly, perches on a yellow branch against a blue sky with puffy clouds.

Now back to the top of the center column, with the good luck penny showing Lincoln’s profile, against an aqua background.

Below the penny is a gold anchor tilted to the left, against a black background. The anchor is highlighted with darker shadows, as if it’s in 3-D.

Below the anchor is a tall Japanese lucky cat, a Maneki-Neko – a symbol found in many Japanese businesses. The cat is gold and black against a white background, with pink ears, a pink nose and a pink collar with a bell. Just below the collar is a light blue scarf, with white highlights on the right. Against his belly, the cat holds an elongated coin.

The cat’s left paw, on your right, is raised in greeting. The name, Maneki-Neko, means “beckoning cat.”

Below the cat, a tall anatomical red heart is painted on a light blue background. Below the heart, at the bottom of this center column, is a gold hand-shaped symbol on a red background. This is a Hamsa – a symbol of protection in the Middle East and Mediterranean. It’s an open hand, if that hand had a thumb on each side and three fingers all the same length in the middle.

In the center of the hand is a large, bright blue eye with a black pupil, sparked with light. Around the eye are painted triangular red lashes. Below the eye, a curving green arc and a curving red arc, stretch across the palm.

Another thin green line arcs over the eye, stretching from thumb to thumb. The thumbs on the right and on the left, curved to a point and facing in opposite directions, each have a green dot like an eye, and look like birds.

The three fingers stretch up, pressed together, with three red lines arcing across their base. The fingers on the right and left have thin red lines like abstract flowers growing, – and the blooms are red hearts.

The finger in the center has a curving green new Moon at the tip, above two red V’s.

At the top of the right-hand column are the pair of dice rolling fives against a gold background. Under the dice, a ladybug sits up, her six legs splayed, pointing her red belly at us, against a white background. She’s outlined in black and highlighted in gold.

Below the ladybug is a gold smiley-face with vertical black oval eyes, against a red background. The face is larger than this rectangle, so the sides are cut off. But its cheery smile and hopeful eyes stand out.

Below the smiley is a gold and black horseshoe against a black background with stars.
The horseshoe points up – so the luck won’t spill out. It’s wide and strong and gold, with four black circles curving up each arm. The arms both end in squared-off tips.

Below the horseshoe is a shooting star – a black five-pointed star against a white background, trailing bands of yellow, red and blue that shoot diagonally to the right.

And in the bottom right corner, a giant four-leaf clover – but it’s painted blue, against a gold background.

Jimmy Breen and Anthony Freese are based in St. Petersburg. For the apartment’s grand opening in February 2020, they painted an interior mural in the courtyard by the pool.