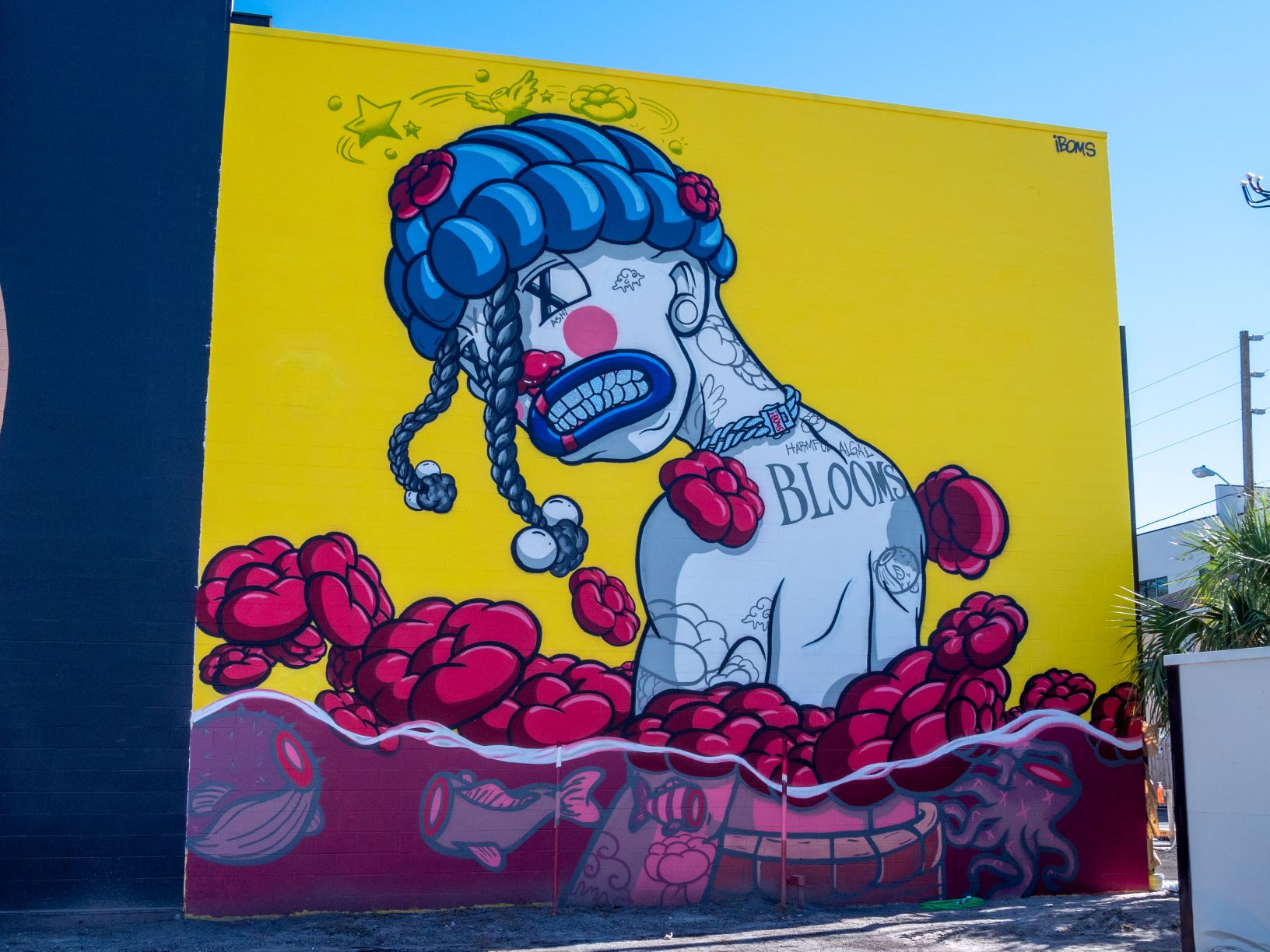 Jabari Reed-Diop, otherwise known as iBOMS is a 21-year-old artist based in St. Petersburg, Florida. His artistic acumen comes from personal experience and formal education at Douglas Anderson School of the Arts in Jacksonville. Despite constantly pushing his craft and experimenting with new mediums, iBOMS’ style is immediately recognizable. At first glance, his work may seem like simple illustrations or even graffiti, but each piece has a story to tell, a deeper message, a powerful statement about love, destruction, or discovery. His characters are complex and often represent aspects of his life as a young black male.
This mural by the artist iBOMS ["eye-bombs”] is called Where the Bloom Begins, at 2324 Central Avenue, at the Grand Central Brewhouse. The mural is set back from the street and takes up the right half of this west-facing wall, 30 feet high and 36 feet wide.

The background is bright yellow. The center of the image features one of iBOMS’ signature stylized cartoon-like characters, named Ashi, a young Black male drawn from the artist’s childhood in south St. Pete. “ASHI” is written in capital letters below his left eye.

Towering over the wall, his back is to us, but he looks over his left shoulder and down. His skin is greyish, with a bright red nose, pink circles on his cheeks and dark grey tattoos on his face, neck and back.

His lips are an exaggerated blue-black with a red vertical stripe on the left. He wears a bright blue textured watch cap – two long black braids sneak out and dangle in front of his face. From his wide-mouth sneer, his teeth are a glittering silver, glinting in the sunlight.

His eyes are blank white with big black X’s. He wears a heavy braided sliver necklace that glitters like his teeth. On the back of his neck, the clasp reads “iBOMS” in red letters.

Ashi stands waist deep in water – the wavy white waterline starts a few feet from the bottom of the wall and his red plaid trousers and gold belt are muted, below the water. Clustered on top of the water is a thick red cloud of algae blooms, like invasive fat red flowers.

The water is red, and there are three fish with their heads cut off, and an octopus with X’s on its skin, clustered around Ashi.

The algae blooms are bobbing up around his body, and seem to irritate him – one on his left shoulder, a large one on his right, even a couple on his cap. The algae and the injured sea life are echoed in his tattoos, black and white outlines of algae and dead fish.

Across his shoulders are the words “harmful algae blooms.” “HARMFUL ALGAE” is smaller, in hand-written capital letters. “BLOOMS” is huge, also in capitals, spreading across his back in typeface. In the top-right corner of the wall is the artist’s signature.

Jabari Reed-Diop], known as iBOMS, is 21-years-old and based in St. Petersburg. Using original characters and a variety of mediums, he challenges perceptions and creates new narratives, through the lens of his own life experience as a young African American male.

Title: Where This Bloom Begins