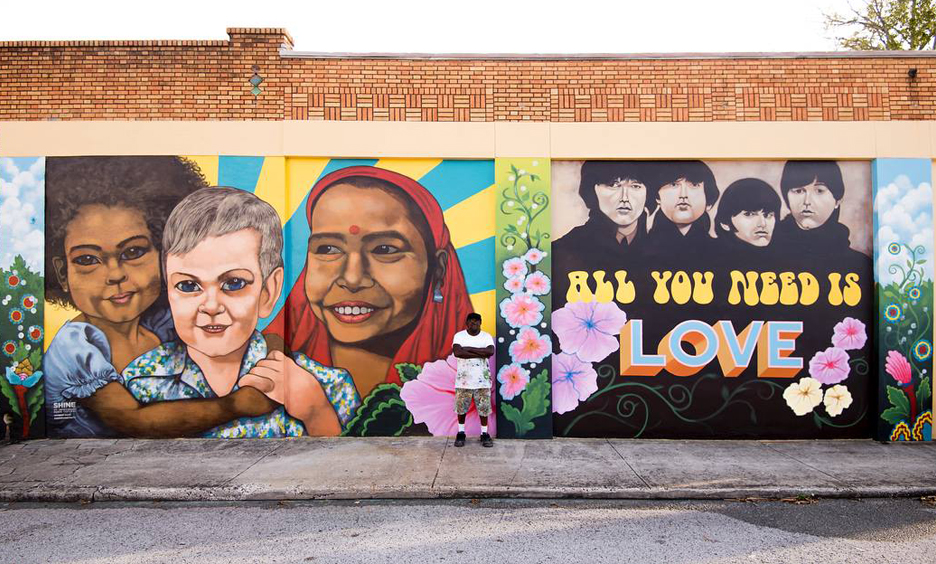 Growing up in historic Ybor City, Herbert Scott Davis developed an early passion for art and culture. A graduate of the Art Institute of Fort Lauderdale and former freelance illustrator, Davis now focuses on fine art, bringing his detailed or abstracted imagery to canvases and walls alike.
“All You Need Is Love,” by Herbert Scott Davis, is at 299 Dr Martin Luther King Jr Boulevard North, facing 3rd Avenue North.

The mural is 14 feet high and 42 feet long. It’s two separate images, divided by a vertical strip of green, with pink hibiscus and curling vines.

On the right panel, is an image of the Beatles, based on the cover of the Rubber Soul album.

Over the top third of the image are, from left to right, George Harrison, John Lennon, Ringo Starr, and Paul McCartney, with sepia-toned skin against a sepia background, wearing long black coats.

Over their coats is the phrase “all you need is love,” from the Beatles song. The words “all you need is” stretch across the middle of the image, in curved yellow capital letters like the Rubber Soul album cover.

On the left side of the mural is an image of three ageless children, rendered from the shoulders up.

Their faces take up most of the image, several times larger than the Beatles’ faces, against a background of yellow and blue bands, spreading out like sun-rays.

On the left is an African-American girl in a blue dress with ruffled sleeves. She’s smiling with her lips together, dimpled, looking out at us. Her hair is in an Afro that’s cut off by the top and left sides of the mural.

Her arms are around the shoulders of the next child, one arm across the front and the other around the back, meeting above his shoulder as if she’s hugging him from the side.

The child in the center is a white boy with large blue eyes and short, grey-black hair. He wears a blue and green flowery shirt. One hand reaches up toward his collar, touching the hands of the girl that’s hugging him. He’s smiling, looking straight at us.

On the right side of the image is a girl with brown skin, a red scarf covering her hair, and a red Bindi spot in the center of her forehead. She looks at the other two children, and is smiling, a row of teeth showing white between red lips.

We see her left ear in front of the scarf, with a metallic blue earring. Just below her is the biggest pink hibiscus of all, with a hot pink center.

The mural is framed on the left and right by vertical strips of flowers against a cloudy blue sky.

Growing up in historic Ybor City, Herbert Scott Davis developed a passion for art and culture. A former freelance illustrator, Davis brings his work to canvases and walls alike.

He says, “the reason I created this mural is to counteract the current political climate, which seems to further separate this country. The children represent innocence and simplicity, not corrupted by hatred and politics. It’s through their eyes we should understand the message, All You Need Is Love.”

Title: All you need is love