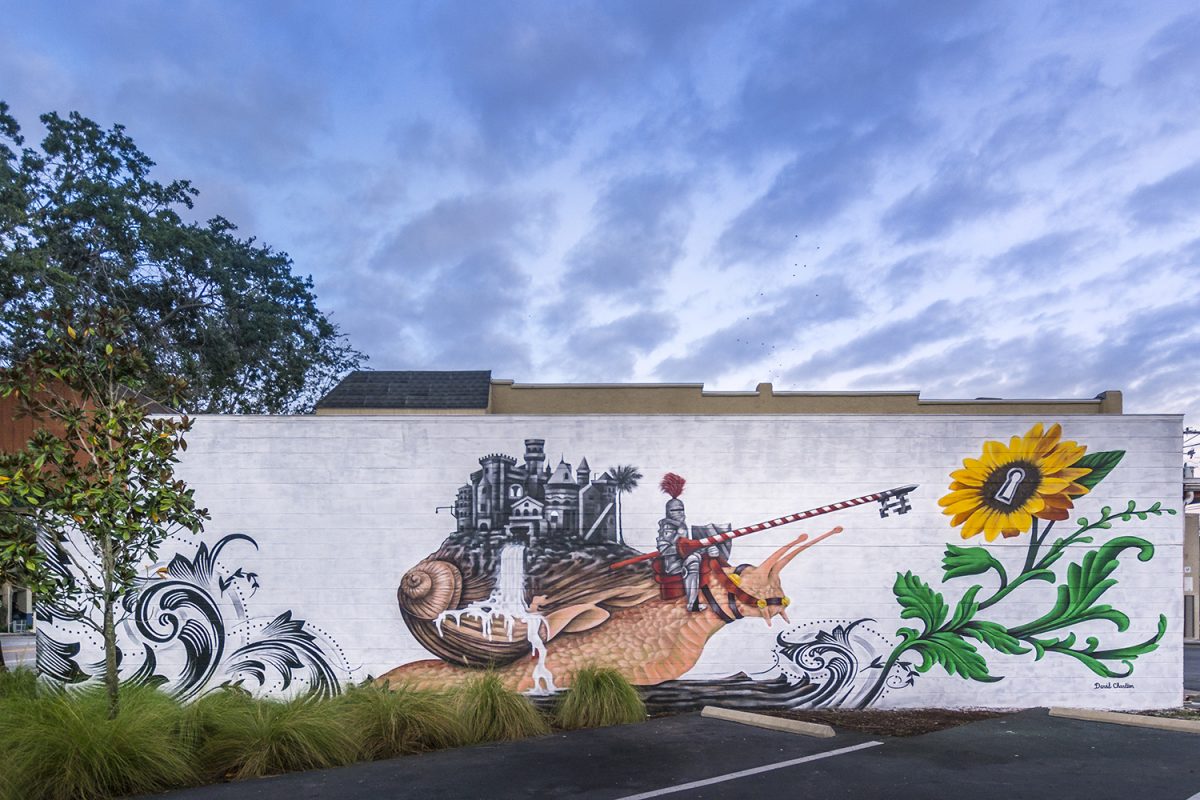 Open Call artist David Charlton, also known as Top Hat Dave, is a mixed media Artist and Owner of The Space Between gallery in St. Petersburg, Florida. Influenced by a child-like imagination and wonder, David's surrealistic creations manifest perspectives of the universe, and depths of connection with the soul. Through his stylized composition of natural elements, figures, and understanding of diverse culture, David develops a playful, yet complex narrative for the eye.

A swashbuckling knight rides an enormous snail towards a cowering sunflower, on this east-facing wall at 2421 Central Avenue.

The background of the wall is white. In the center, a giant peach-brown snail with rosy highlights sprawls across the wall, facing to the right. The snail surfs a curling black wave with filigree breakers. The wave breaks low in front of the snail and kicks up in elaborate, black and white foam behind it, in patterns that echo old embroidery, or lace.

A detailed, black and white castle grows out of the snail’s tan shell, boasting a cluster of towers that stretch toward the building’s roof. No two towers are the same – some are round and flat, others sharp and pointed. Pedimented, battlemented, striped and segmented towers – with a palm tree as tall as the towers, on the right.

A wide waterfall gushes from the castle’s base and splashes down the side of the snail’s shell, breaking up and spreading wide, as it meets with the shell’s curves.

On the snail’s neck sits a knight in armor, on a plush red saddle like you might use on a camel. A thicket of red feathers bristles straight up, from his helmet.

The snail wears a harness of leather and gold, wrapped across its muzzle and twice around its neck. On his left forearm, the knight bears a shield that faces away from us. His left glove grips plush reins with bands of light and darker red. His right glove is tucked inside the bell of his lance, where he grips the weapon. The lance is white with red stripes, like a barber pole.

The lance points up and to the right. On its tip is a large, elaborate silver key with a sharp, squared-off geometry.

The lance and key are pointing to a giant sunflower that spreads across the right-hand quarter of the mural. The flaming gold petals of the sunflower frame a dark center with a keyhole in the middle, that looks like it fits the key the knight is brandishing.

The sunflower bends backwards, as if trying to escape. Its glowing green leaves and the golden petals are the brightest spots of color on the wall.

The stem curves and bends, the rich green leaves shift their shape as if the plant is made from many different species – beginning at the bottom with wide, feathery leaves. . . then a long delicate stem arcing to the right, with tiny, curling side-shoots. . . then a thick segmented fan of leaves. . . a heavy green bud about to blossom, pointing at the knight. . . then a thin shoot with tiny rounded leaves, reaching for the wall’s edge. And tucked behind the flower, a patterned leaf that comes to a sharp point.

David Charlton painted this design with spray paint. A tattoo artist and gallery owner, Charlton uses spray paint even when he paints on canvas.

The concept of The Alchemist is the transformation of darkness into light. The snail symbolizes taking your time — no need to rush our life’s journey.

The Fibonacci Spiral, the curving spiral of a galaxy or a seashell, is echoed in the snail’s shell, and the curling waves. For Charlton, that spiral symbolizes the kingdom within. The knight’s armor gives us the shape of a human, any human. Under the armor is the soul, our driving force.

The lance with the key is, aiming at your goal. Here, the goal is to connect with nature. Charlton explains, “We are all nature and can learn to connect with one other harmoniously — an ecosystem.”

And the sunflower? When the sun sets, these flowers turn toward each other, for the light.