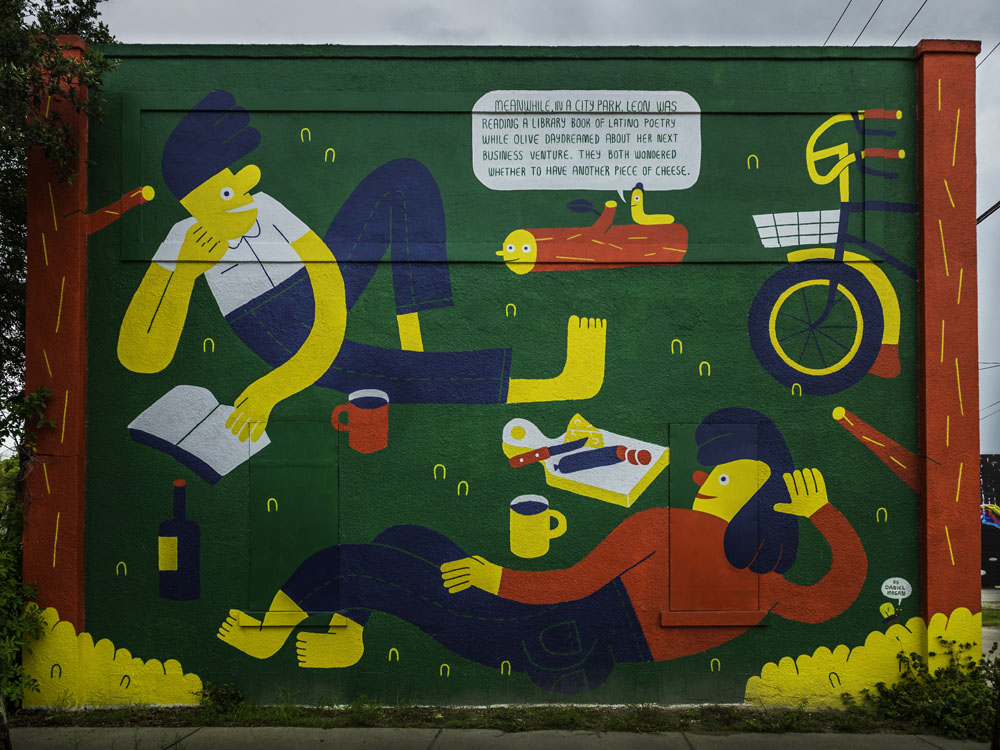 Daniel Mrgan is a local graphic designer and illustrator. Seeking refuge in the US to leave behind years of armed conflict in Croatia, Daniel moved to Pinellas Country as a young adult. Now a regular in the St. Petersburg art scene, Daniel showcases his whimsical characters at galleries across Tampa Bay and recently lent his illustrations to St. Petersburg First Night 2016.
On the east-facing wall of 1701 1st Avenue South is a delightful cartoon mural called, A Picnic with Daniel Mrgan (MER-gan).

It’s smaller than many of the murals on our tour, 25 feet wide by 12 feet high. It stands out in an industrial block, with a rich green background and bright gold, red and dark blue cartoon figures.

Along the bottom, almost as wide as the entire mural, a cartoon woman is sprawled on the green as if it’s grass, resting on her right elbow. Her back is toward us, her face in profile. Her face, her hands and her bare feet are gold. Her nose is red and round like a clown, her lips are a red curve and her eye is a white circle with a black dot. She wears a rich red shirt with long sleeves and dark blue jeans with the stitching painted on.

Even in this simple, cartoon style, the woman’s expression is pleased and interested. Her body is relaxed. She’s listening to a cartoon man above her, toward the left.

The man reclines on the green grass facing, propped up on his right elbow with his finger in an open book. His left leg is bent and his right leg stretches across the mural, not far from the woman. His face is turned, in profile, smiling and talking. His hair is dark blue, wild and bent-over like a rooster’s comb. His eye is the same white circle with a black dot and his mouth is half-open, with the curve of a mouth cut out.

His face, his arms and bare feet are gold. He’s wearing blue jeans as well, with the stitching carefully painted, and a white short-sleeved shirt with one quick black line to show it’s buttoned up, and a short black line for a pocket.

The man has a book open, marking his place with his fingers as he chats to the woman. He has a red mug of coffee and she has a gold mug. Between them is a cutting board with cheese, a long knife and a sausage with two slices cut.

The dark green background of the mural makes a peaceful picnic ground, marked here and there with tiny gold arches. The mural is bordered on the left and the right by rich red trees, sprinkled with gold angled lines on the trunk. Each tree has a branch jutting into the mural, with the end sawed off, revealing golden wood. Wavy gold bushes are clustered against the base of each tree.

Toward the upper right corner of the mural, above the man’s stretched-out leg, is a fat log that’s been cut from a tree. The log has a smiling gold face on one end, looking at the man, with surprised eyes and a pointy nose.

Sitting on the log is a gold worm in a jaunty derby hat. Above him is a word bubble, with these words lettered neatly in capital letters.

“Meanwhile, in a city park, Leon was reading a library book of Latino poetry while Olive daydreamed about her next business venture. They both wondered whether to have another piece of cheese.”

To the right of the worm, the front wheel and handlebars of a gold bicycle jut into the mural, with red hand grips and a basket, as if the couple parked their bikes just outside the frame.

In the lower right corner, just behind the woman’s elbow, a butterfly with gold wings is perched on a wavy gold bush. The small word bubble by the butterfly reads, By Daniel Mrgan.

Daniel Mrgan is a local graphic designer and illustrator. He grew up in Croatia in the midst of armed conflict, and moved to Pinellas County as a young adult.

This mural is a charming, offbeat window into a world like a children’s book. Two tall palm trees grow out of the sidewalk right in front of it, their trunks blending into the view.

Just around the corner, on the north wall of the same building, is another mural – Beneath the Shell, by Michael Reeder. And across the parking lot on your right, a multicolored woman is painted with her arms spread wide, by Dasic Fernandez.