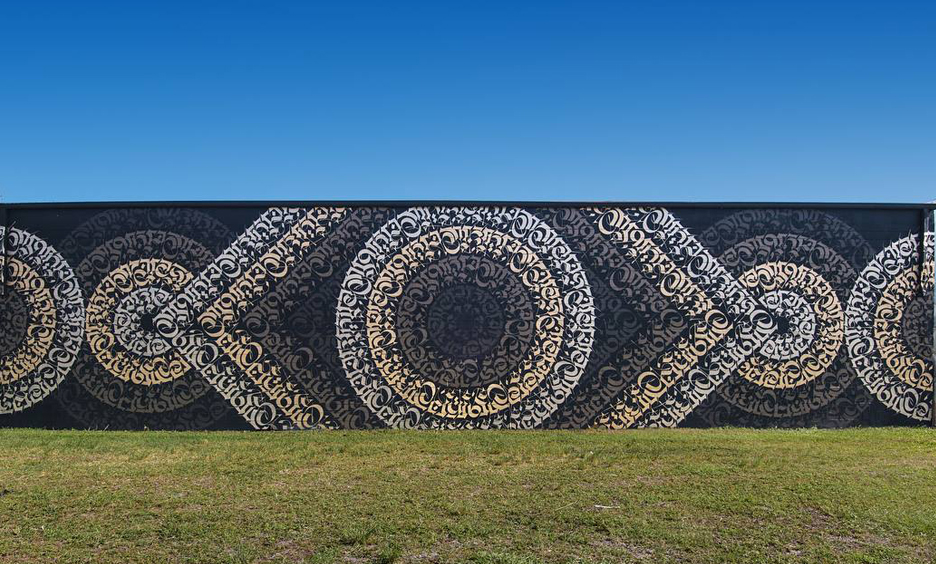 Cryptik creates from a palette of wonder where science, math, and art intersect. His artist practice is about asking questions, and his intricate works spread across mammoth walls or canvases in stylized depictions of spiritual universality. The Southern Californian hypnotically blends Eastern philosophical mantras with black letter bombing, merging the ancient and sacred in a modern quest for awareness.
This mural by the artist Cryptik is called “The Great Utterance – A Prayer to the Sun,” at 601 24th Street South. It faces the Pinellas Trail, just south of the intersection of 24th Street South and 6th Avenue South, on the south side of the Trail.

The mural takes up the entire wall, 20 feet high and 74 feet long – a pattern of silver, gold and shades of grey-ish brown, against a black background. It’s an abstract view of huge circles and angles, centered half-way up the wall and made out of calligraphy, in Sanskrit.

On either side of this enormous circle in the middle are two angled halves of a square, as if the circle is set inside a square that’s larger than the wall – and the square is rotated 45 degrees and cut off by the top and bottom of the wall, so it’s like a greater-than and less-than sign that frames the circle. That square has the same order of colors – dark brown at the center, then lighter brown, then gold, and silver on the outside.

Every shape is made of curved Sanskrit letters.

CRYPTIK SHINE MURAL FEST 2017 from Filipe Bergson on Vimeo.
The corners of these giant greater-than and less-than signs reach into the center of another large circle, on either side. On these circles, the colors are reversed – silver on the inside, then gold, then light and dark brown on the outside. Overlapping these two circles are two more, on either side. These final rings are cut off at the center by the ends of the wall, the same pattern as the center circle, dark brown in the middle to silver on the outside.

This mural is on an industrial grey warehouse. Frequent bicycles pass on the Pinellas Trail.

From a distance, it creates a beautiful, geometric pattern. But the careful calligraphy gives the feel of an ancient prayer.

Cryptik, based in Los Angeles, works where science, math and art intersect. His intricate works merge the ancient and the sacred with a modern quest for awareness.