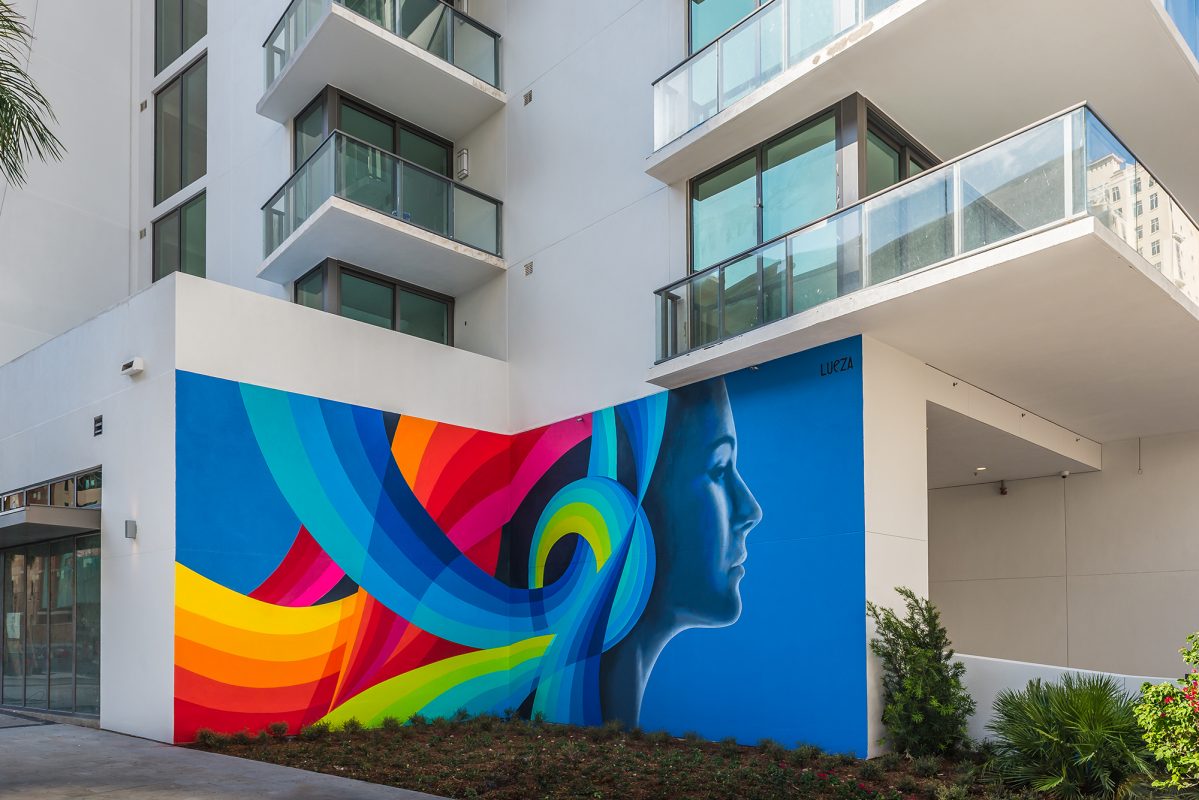 Argentinean born visual artist Cecilia Lueza is best known for her vibrant public art pieces in a range of mixed media. Her geometric, nature inspired murals can often be found in unexpected locations such as street intersections and rooftops. Her work has been shown in galleries throughout the United States, South America, Spain and France.
A rich, dusky blue with vivid rainbow swirls and the blue-tinted profile of a woman lit by moonlight is the focal point of 100 1st Avenue North. The mural is on the northwest corner of Central Avenue and 1st Street North, across the street from The James Museum.

Cecilia Lueza calls this piece, The Blue Hour. She explains, “It’s inspired by that magical time between daylight and darkness. It explores the visual effects of color, and movement, while evoking wonder and contemplation.”

The background is a rich, deep blue, the color of the sky moments after the sun sets. On the right half, facing Central Avenue, a calm and lovely woman’s face looks toward the right. Her face is in profile, from the neck up, so large that the top of her head is cut off by the mural’s edge. She’s painted a range of dark and lighter blues – and very realistic – like an idealized black and white photograph that’s been tinted blue.

Her expression is thoughtful, as if she’s been watching the sun set and is looking at the quickly fading colors as the stars and Moon begin to glow around her.

Her profile shows a graceful neck, high cheekbones and a smooth forehead, one dark eyebrow in a curve, and long dark lashes. The right edge of her face is outlined in light, as if she’s facing a full Moon. Her eye, her cheek, the edge of her nose, her lips, her neck and throat, are highlighted by moonlight. The rest of her face, and her neck, are dark indigo.

Instead of the long dark hair we expect, thick swirls of blue and green – and swirls of red, pink, orange and gold – flow behind her head and across the left half of the mural, the half that’s facing 1st Street.

A swirl of blue, in stripes from dark to light, touches the back of her head, falling in an undulating band from the top of the mural to the ground, as if this ribbon of color continues past the edges of the mural. Another end of this long band curves down and sprawls across the left half before arcing up and away.

A band of color striped from yellow and green to blue, twines across the left half of the mural before it swoops around the other blue band like a crochet stitch.

Behind the swirling blues and greens is a wave striped in pink, red, rose, watermelon and peach. It twists behind the blues and ducks under another wave, with stripes that run from red to gold. The blue-green swirls and the red-pink-gold swirls dive and tangle, full of motion.

The mural is a lovely combination of the calm and thoughtful blue-toned woman gazing out as light falls on her face – caught in thick waves of color.

Cecilia Lueza was born in Argentina and is now based in St. Pete. She’s known for vibrant public art pieces in a range of media. She explains that this mural has a sense of identity, and an element of discovery.

Her goal with this corner space “was to create an uplifting, evocative, and colorful focal piece that could be viewed and enjoyed from every angle.