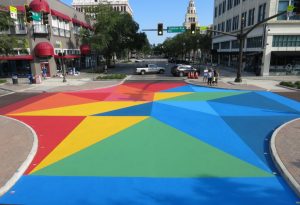 An Argentinian-born artist and sculptor, Cecilia Lueza is well known for creating vibrant public art pieces in a range of mixed media throughout cities in the U.S. such as Tucson, AR and Norfolk, VA. Cecilia is also the artist behind the notable Connecting The Blocks project in Ft. Lauderdale, who along with local volunteers transformed street intersections with dazzling patterns of color.
This mural by Cecilia Lueza stands out from every other mural in St. Petersburg. It isn’t painted on a wall, but spreads across the intersection of Central Avenue and 5th Street, painted on the street itself outside Florida CraftArt.

A rainbow of huge triangles and geometric shapes angles across the intersection, 74 feet square. Red, orange and gold spread out in front of Florida CraftArt on the northwest corner, jutting into green and shades of blue moving toward the southeast. It’s as if children colored on the street with chalk.

The brick sidewalks that frame each corner are rounded. So the mural is shaped like a square, with four bites taken out of the corners by the curving sidewalks.

Lueza’s design, called Common Ground, is painted on the asphalt with street paint, the kind that’s used for lane markers and parking spaces. She mixes sand into the paint, to make it safe for drivers.

This intersection is a kaleidoscope of color, that cheers up passing cars and pedestrians.

Lueza painted similar intersections in Fort Lauderdale, before this. Instead of being a distraction, the city reported a drop in traffic accidents, as drivers slowed down to look.

Cecilia Lueza was born in Argentina. She’s based in the U.S. now and known for her vibrant and colorful public art.

Lueza knows that murals on streets won’t last as long as her wall murals, because of all the wear and tear from tires. Here on Central Avenue, more than 50 local artists volunteered to help her. They wound up painting this entire intersection twice – because the first time, an unexpected storm washed it away before the paint dried. So when the sun came out they painted it, again.