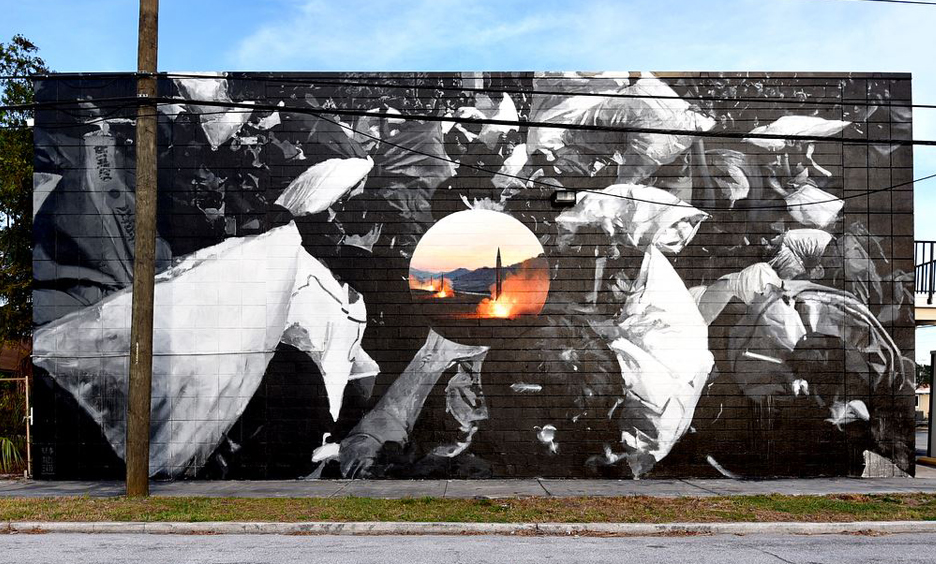 About Axel Void and L.E.O.

Axel Void (Alejandro Hugo Dorda Mevs) was born in Miami in 1986 to a Haitian mother and a Spanish father. Raised in Spain from age three, he was strongly influenced by classical painting and drawing. Axel studied fine arts in Cádiz, Granada, and Sevilla, and has been immersed in graffiti writing since 1999. He was based in Berlin before moving to Miami in 2013, where he currently resides.
This powerful mural at 165 13th Street North faces west, across the street from the new St Pete police station.

Inspired by the turbulent news of nuclear tests and US threats of war during the 2017 SHINE Festival, Axel Void chose the turmoil of current events as his subject.

The mural is based on a juxtaposition of images, 23 feet high and 51 feet wide. In the background is his interpretation of a black and white photograph taken in Washington Square Park, where people get together once a year and have a pillow fight. The wall is mostly black, and full of motion – white and grey pillowcases caught in mid-throw, and mid-impact.

Along the top of the mural, you can just make out a band of trees and bushes in the park. Everything else in the frame is a sea of people in a frenzied pillow fight. Backs and shoulders, arms raised, but few recognizable faces – most faces are obscured by pillowcases flying, turned away from the camera and into the fray.

At the center of this black and white chaos, is a circle of sunrise colors. A gorgeous mountain range, in shades of purple against a peach-pink sky. And a narrow road, leading toward the mountains – running alongside a row of nuclear missiles, launching in a cloud of white-hot fire and steaming orange smoke.

The closest missile is very close to us, orange clouds of smoke rising more than half its height and the burned-out grass beside it glowing red. The missile beyond it is close enough that the fire is reflected deep red in the grass.

Axel Void says this wall is an attempt to understand human behavior and our relationship to power. From the power that technology and weapons allow us, to emotional or political power over others.

The mural was painted shortly after the 2017 mass shooting in Las Vegas. In trying to understand that event, Axel Void explains that horrific acts of violence are considered ‘out of the ordinary.’ But he notes that random violence has become part of our natural behavior.

Axel Void, or Alejandro Hugo Dorda Mevs, was born in Miami to a Haitian mother and a Spanish father. Raised in Spain from the age of three, he was deeply influenced by classical painting and drawing. Axel studied fine arts in Spain and is known for large-scale striking portraits and photo-realistic mural work around the world.

He collaborated on this mural with Reginald O’Neal, known as L.E.O.