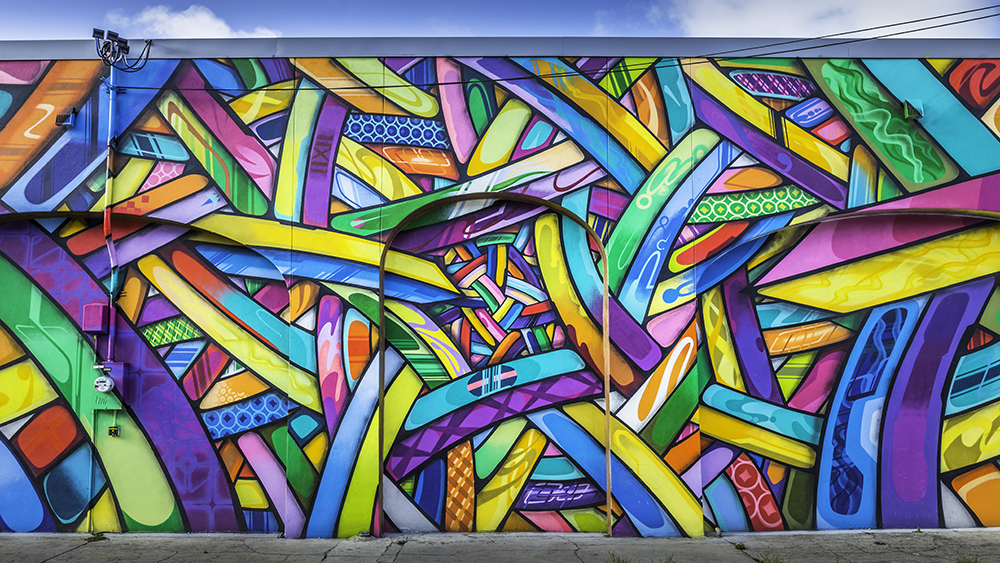 Based out of: San Francisco, California

Apexer is a street artist who utilizes his foundation in graffiti and calligraphy to create colorful and complex pattern work on walls from Las Vegas to New York. Part of the Gestalt Collective that engages in collaborative murals in San Francisco, Apexer is a leader in the Bay Area art scene who has curated several mural projects and been featured in documentaries and publications on the area.
This mural by the artist Apexer is on the back of a low white building at 965 Central Avenue.

The mural is actually around the corner of 11th Street, facing the alley, and located at 1000 Baum Avenue North.

The mural is abstract, a feast of motion and color. The wall is a tangle of thick, interlocking, multi-colored curving lines, 74 feet wide and 20 feet high. Reds, yellows, purples, blues and greens, curve and twist and tangle. Each stripe has a unique texture, from geometric patterns to gaseous swirls. These thick, interlocking, curving lines appear rounded, like interwoven tubes or cords. Each colored stripe is shaded in lighter and darker hues, so that they suggest depth and life. The lines are larger on the sides grow smaller in the center, as if they’re being pulled through the building.

The wall is inset with five arched alcoves about a foot deep, but the stripes arcing across these alcoves make the building’s texture barely noticeable. The overlapping stripes curve up to the roof and plummet to the ground, as if the complete image goes beyond the wall, into the sky and deep below the street.

Apexer is a street artist from San Francisco, a third generation San Franciscan. He finds inspiration, even abstract, in the flora and fauna of Northern California. His work is rooted in graffiti and calligraphy, and his colorful and complex patterns are found on walls in Las Vegas and New York.

This mural is one of many that line this alley, half a block north of Central Avenue. Across the street are a cartoon Ben Franklin and George Washington with skull masks, and the words, We the People, You Must Pay. Two buildings down from these colorful stripes, on a low historic brick wall is a psychedelic sci-fi scene with a giant eyeball, beside a large, realistic head of Salvador Dali and an abstract cartoon figure. Murals continue on both sides of the alley for two blocks, until it dead-ends into Dr. Martin Luther King Street North.