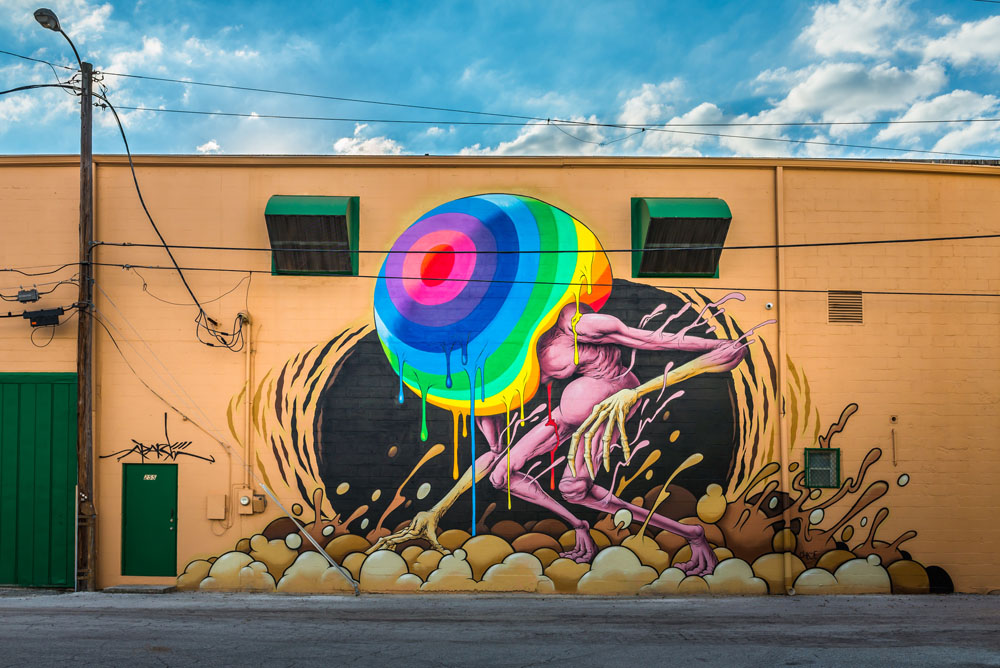 Based out of: California

Alex Pardee is a world-renowned multi-media designer and illustrator who has brought his unique aesthetic to music, film, animation, apparel, comics, and more. A recent San Francisco Bay Area transplant, Alex’ imagination has spawned original and prolific characters as catalogued in his books, Awful/Resilient and Doppelgangers, and exhibited in galleries throughout the US and beyond.
This mural by Alex Pardee is on the east side of the building at 251 10th Street North.

The mural faces 9th Street North, next to the parking lot of the Coney Island Grill.

The mural is called Brightmare, 46 feet wide and 19 feet tall. An emaciated, purple, naked figure is bowed down under a huge, sagging rainbow-colored ball where her head should be. She’s bony and hunched over, with purple skin and long grey skeletal hands, pendulous breasts and a swollen belly. The figure is on tiptoe, knees bent, one hand on the muddy floor for balance.

The sagging striped ball covers her head and neck and droops toward her belly – a red dot like a bullseye in the center of the ball, is ringed with pink, blue, green, yellow and orange. It’s like a rainbow balloon that’s leaking air, and jammed onto the figure’s head. Colors drip from the ball, and purple splashes from her body, as if the entire mural is melting in the heat.

The figure is stooped in front of a gaping black hole painted on the wall, like the opening of a cave. At her feet, bulbous blobs of white, tan and brown are spurting mud and water into the air.

On the lower left corner, the muddy blobs touch a green metal door in the side of the building. The outline of the cave crosses vertical pipes and electrical connections bolted to the wall. Two dark metal exhaust ducts frame the figure’s heavy rainbow head.

The background of the mural is the same stark industrial tan of the rest of the building, a massive structure that takes up almost an entire block.

Alex Pardee is a multi-media designer and illustrator who’s brought his unique aesthetic to music, film, animation, clothing and comics. When he painted this for the 2016 SHINE Festival, it was the largest mural he’d ever attempted. Ricky Watts, another artist on our tour, flew in from San Francisco to help with the mural’s completion. The mural is painted in aerosol, but the gaping black hole is brush painted.

To your right, in the alley facing this mural, a small window with heavy metal bars reflects the mural’s rainbow colors.