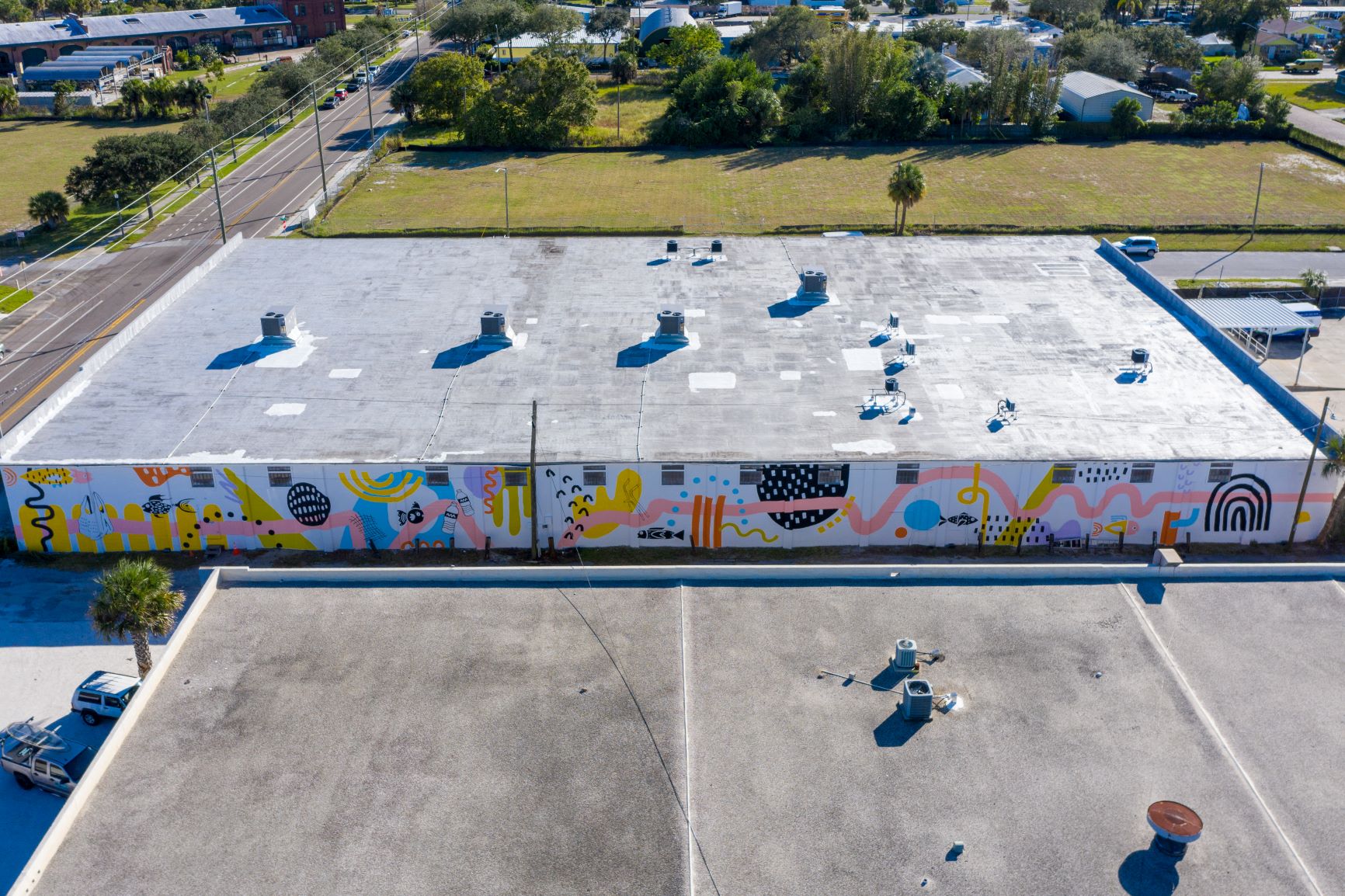 Elle is a Florida native, born and raised in Sarasota. She studied printmaking and painting at Florida state university, and received her BFA in studio art in 2016. She has since pursued her artistic career via freelance design, illustration, clothing design, and murals. She currently lives and creates locally in St. Petersburg.

Elle began her current body of paintings with the intention of using it as a release from her otherwise representational freelance career. She loosely restricts herself to using the most basic colors and forms, focusing on primary colors and playful shapes. “i love the idea that such pure elements of design can come together into a composition that has never been executed quite the same way. I think i was looking for an outlet to bring positivity and playfulness to an aspect of my life that can, at times, become all work, and no play. It’s important to me for art to remain something i find passion and pleasure in.”

Relating to her mural designs--she strives to create contemporary, effortless imagery that compliments simple, modern spaces. She is inspired by objects throughout daily life that are often overlooked. The mundanity of the every day objects relieves the necessity of meaning people often seek in art. There is interest to be seen in everything, and she has endlessly sought to give these objects their 'moment in the sun'.
This mural by Elle LeBlanc ["Le Blahnk"] is called Pop Art Plastic. It sprawls across an enormous warehouse wall at 2333 3rd Avenue South. The mural faces north, 17 feet high and 145 feet wide.

It suggests a seascape from a children’s book – simple shapes in vibrant pink, yellow, blue and black against a white background. Abstract curves and shapes mix with fish and examples of plastic pollution. The mural is painted around the many square, barred windows high up on the wall, and crosses over the window frames.

A thick pink band spans the entire image, bending and swooping around the other figures, all the way from left to right.

On the left side of the mural, eight rounded yellow pillars rise halfway up the wall, like a fence, or abstract coral. A yellow and pink fish swims to the right, and a smaller black fish swims to the left. Between them floats a plastic shopping bag in white, painted with black capital letters that say “THANK YOU, THANK YOU, THANK YOU.” The letters are bent and crinkled, like the plastic bag.

Perforated coral-like discs of red and black float on either side of a tall green abstract coral branch bending to the left, and a zig-zag purple squiggle. An arc of small black circles rises almost halfway up the wall.

Near the center of the mural, a bulbous light blue shape with a circular white center arcs almost as high as the wall. Three gold half-circles near the top echo the shape of a candelabra, and touch the top of the blue shape.

The wide pink band dives below the mural and then up, across the big blue shape.

In the white circle at the center of the blue, a small black fish with a perky line of dots for eyelashes, swims to the right – across the pink band and close to two large plastic water bottles, painted in black and white.

A lavender disc, a wavy vertical orange squiggle, and bulbous dripping shapes of green and yellow, move across the wall. A cluster of small black arches bubbles up.

A black fish shaped like a 2-liter plastic bottle swims to the left, along the bottom of the wall, under three floating plastic bendy straws.

A large black semi-circle perforated with white dots swoops down from the top, as the pink band undulates across the wall. Circles of red and blue bob in the imaginary water, beside another black fish swimming to the right.

Schools of black vertical rectangles hover at the bottom and cluster at the top of the wall, with abstract coral shapes of yellow, green and red.

A fish with pink head, yellow body and red and blue fins swims to the right. Just before the thick pink band hits the right edge of the wall, it passes under a looming stack of four fat black concentric arches, horseshoe-shaped and standing out among the pastel colors.

About a foot from the wall’s edge, just below the fat pink line, a small tilted yellow dome is painted with the tiny words “in memory of Nick Moses” in black capital letters.

Back at the beginning of the wall, the artist’s signature is stylized in the bottom left. A tall, stretched-out capital “E L” on top, and just below, “L E.” Her Instagram handle is beside it on the right, lying sideways.

These bright colors and abstract shapes are recognizable in other work by Elle LeBlanc. About this mural, she explains, “Speaking about plastic pollution in our oceans has become a familiar subject, especially living in a coastal city.

“With that in mind, I wanted to be direct in the message of my mural, without being redundant—especially because I feel St. Petersburg, specifically, has taken measures in the last few years to begin a huge effort to minimize the plastic waste we produce here.

“Staying true to my aesthetic, I intended to create a colorful atmosphere that makes the subject approachable – and ultimately leaves viewers with a sense of positivity toward the future of our efforts in reducing plastic waste.”

Elle LeBlanc is a Sarasota native, and lives and works in St. Pete.