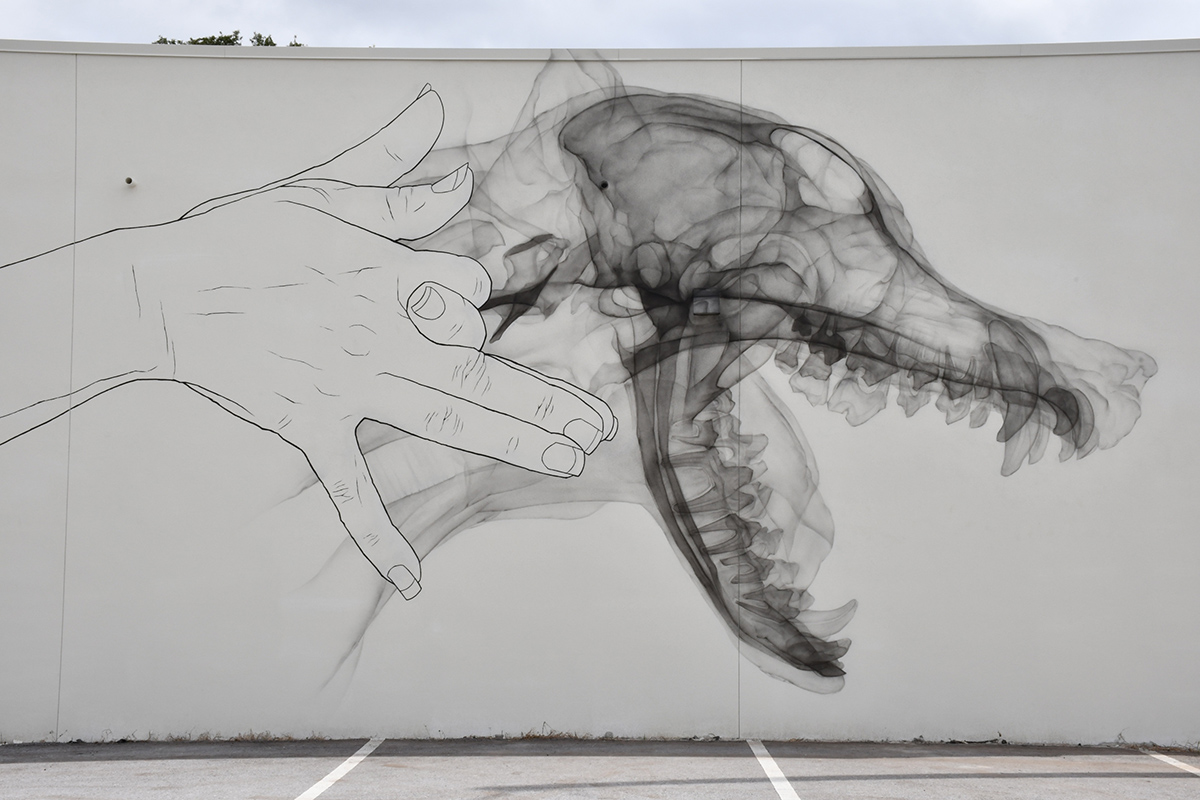 Based out of: London, England

London based artist SHOK-1, has been exploiting the technical possibilities of a spray can since the 1980’s. He’s best known for pioneering the x-ray technique, influenced by his formal background in science and his relentless dedication to technical precision as an artist. His mastery of aerosol art began early on as a graffiti writer and though he’s reinvented his style many times over, SHOK-1’s work is widely regarded as foundational in the contemporary street art movement.
Dangerous Visions

The mural at 2038 1st Avenue South is a black and white shadow puppet of a dog with its jaw open wide.

But the shadow is – in part – a photorealistic X-ray of a dog’s skull, with bones and teeth clearly defined.

The title is Dangerous Visions. The UK graffiti artist known as SHOK-1 earned a degree in biochemistry. He’s been painting graffiti since the 1980s, but his career took off when he started painting – X-ray images.

SHOK-1 acquires actual X-rays from friends in the medical field. He takes great care to make his paintings accurate, because his online followers critique the precision of his painted bones. For this mural, he examined more than a hundred fifty X-rays, to find the perfect one to paint for SHINE.

The background of the wall is white. The mural faces west, clearly visible to cars headed downtown on busy 1st Avenue South.

Most of the mural is white, with wide white edges. The hands that make the shadow puppet are simple, delicate black outlines against white paint. On the left, about a quarter of the way across, the hands emerge halfway up the right forearm, the left arm hidden.

These enormous hands reach upwards, to the right. Just past the middle of the mural, the fingers of both hands wind together to make the shadow of a dog with its mouth open. The thumbs curve up to make the ears. Index fingers wrap down, out of the way.

The middle fingers stick straight out, together, with pinkies angled down to make the jaw that opens wide, and to the right.

Spreading out behind the hands is the shadow dog, so large one ear is cut off by the top of the wall and the bottom jaw almost reaches the ground. While the hands are a simple cartoon outline, the dog’s shadow is a detailed image of a black and white X-ray with realistic bones and teeth.

The skull and jaw are dark and sharply detailed. Grey shadows echo ligaments and muscles, a panting tongue, and the wirey tendons of the dog’s neck. The dog’s nose, and the right ear pointing up are soft shadowed greys, just hinting at the shape.

The image is a surprise, a simple shadow puppet that comes alive with teeth bared.

The hands in this design are the hands of SHOK-1’s wife, Debbie. He and Debbie experimented with her hands casting shadows, ’til they found a gesture that the artist felt could accurately cast the shadow of a dog’s skull.

SHOK-1’s technique requires thin layers of Molotow translucent spray paint, made in Germany. He painted this wall overnight for several nights, completing almost the entire image in the dark, with a headlamp.