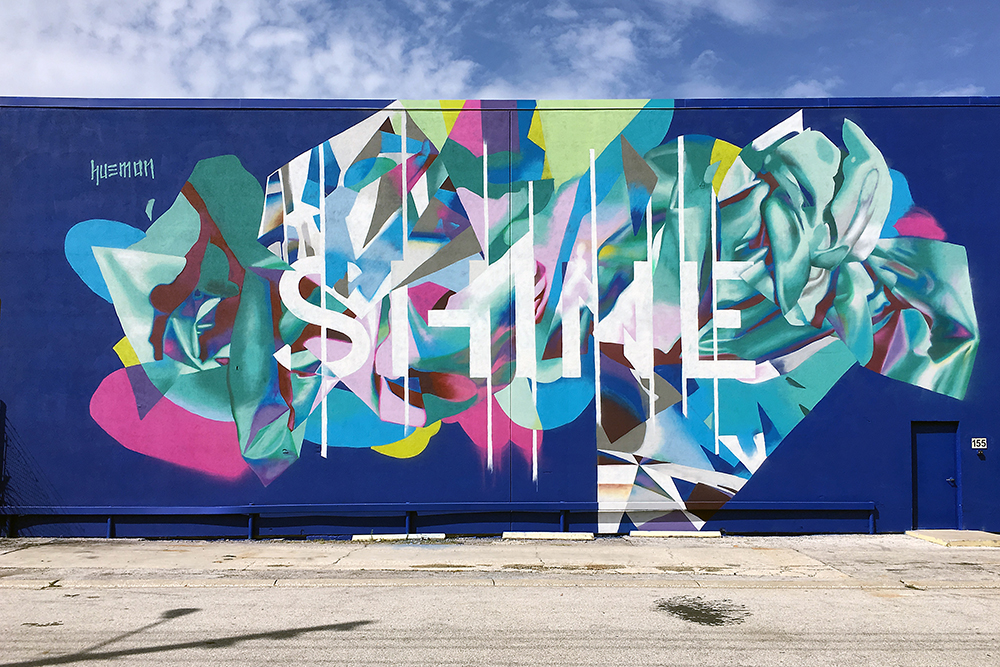 Artist Allison Tinati, known as Hueman, grew up drawing and painting in Northern California, and received her degree in Design and Media Arts from UCLA in 2008. Hueman’s style reveals colorful mash-ups of the abstract and figurative, the beautiful and grotesque. Tightly refined compositions begin with spontaneous paint drips and sprays, creating motion on two-dimensional surfaces. Her layered works can be seen on public walls and in galleries worldwide.
The bold blue mural at 155 17th Street South, is the signature image of the 2017 SHINE Mural Festival.

On a massive wall of rich, deep blue, 66 feet wide and 30 feet high, an explosion of color and patterns like a rough-edged collage spreads out in flamingo pink, teal green, light blues and whites, and bits of yellow-green and brown – a mix of solid colors, jagged shapes and graceful patterns.

Emerging from this sea of shapes and colors are the giant white capital letters, SHINE, partly obscured by colors flowing over and around the letters, but clearly readable.

The outline of the image is jagged in places and rounded in others, like the shape a pile of random objects would take if they were thrown against the wall. But the collage of colors is the artist, Hueman’s, signature, and very purposeful.

In the upper center, sprawling down diagonally to the right, is a band of jagged triangles and sharp-edged forms, a kaleidoscope of blues and pinks and whites, stretching down toward blues and greens that evoke an abstract sky, with a fragment of a rainbow that’s deep blue, brown and grey.

In the only section of the image that cuts sharply to ground, toward the lower right, is a curving edge like a view of the globe – if the Earth was a puzzle of black and white and purple triangles, marked by one rusty horizontal line, with a cream-colored shadow.

On the left and right sides of the image, are rounder, gentler shapes in soft shades of teal green. The shapes are textured, almost three-dimensional, like folds of undulating cloth. These soft green folds shine like silk glinting in the light, bunched up as if the cloth was gathered by a giant hand, to echo the shapes of cloth flowers.

So on either side of this colorful kaleidoscope, the mural appears to be blooming.

The huge white letters that spell SHINE rise out of this tangle of color. Over the letters, and over the central part of the mural, are thin white vertical lines, irregularly spaced, that cut through the word ‘SHINE’ and emphasize it.

In her own words, she’s seeking balance between the beautiful and the grotesque, the abstract and the figurative, and the golden moment between sleep and wake.

Her unique freestyle process involves a spontaneous beginning of paint splashes, drips and sprays that create motion and dimension on flat surfaces.

Her layered works can be seen on walls and in galleries around the globe, including work for big commercial clients such as MTV, Microsoft and Universal Pictures.

Hueman’s featured in a book by Lori Zimmer called The Art of Spray Paint: Inspirations and Techniques from Masters of Aerosol.

This wall faces east, and so does the traffic on busy 1st Avenue South. So the mural is hidden from most people unless you’re walking south to Tropicana Field, a block away at 16th Street.

To the right of the mural is a loading dock. And just to the left is a clump of palm trees and the Pinellas Trail, as it cuts directly through this giant warehouse, a paved bicycle and walking path that’s suddenly under the roof of a dim and shady, block-long industrial building.